A few more examples of the spraypaint dialectic going on at Fort Worden, Washington.

Visited 100-year-old Fort Worden in Port Townsend, Washington, one of the coastal forts long-deserted now that we don't fear enemy navies steaming into Puget Sound from the Pacific. It seems to be the site now of a cold war between the perpetrators of graffitti and the anti-graffiti squads. All in all it makes for some color amid the moldy concrete. 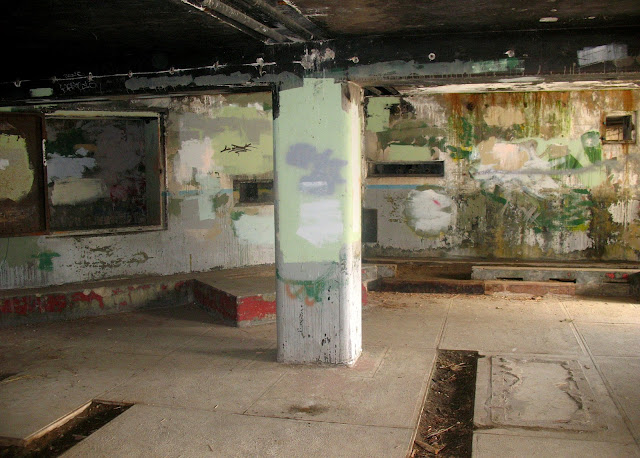 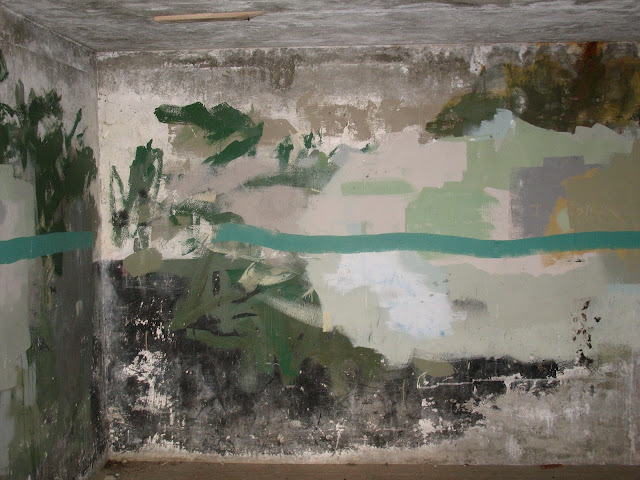 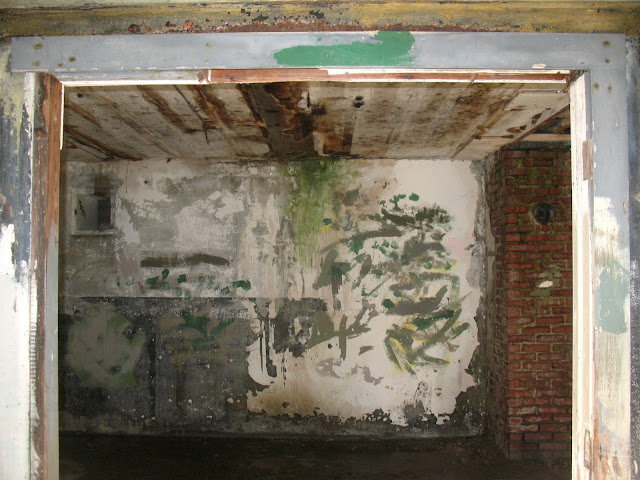 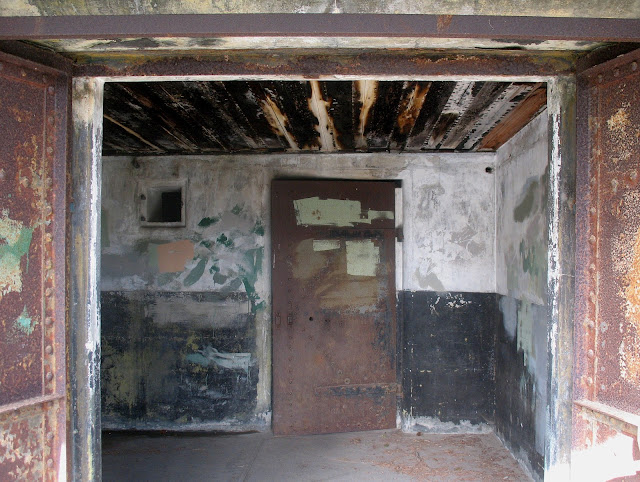 Posted by Sean Bentley at 11:55 AM 1 comment:
Email ThisBlogThis!Share to TwitterShare to FacebookShare to Pinterest
Labels: abandoned, doors, graffiti, walls

I was all ready to put up a miscellaneous handful of literally sepia postcards from my father's old collection, when I got rerailed by the voluminous amount of Internet information I found pertaining to one of the postcard's subjects, the Insane Asylum in Pontiac, Michigan. 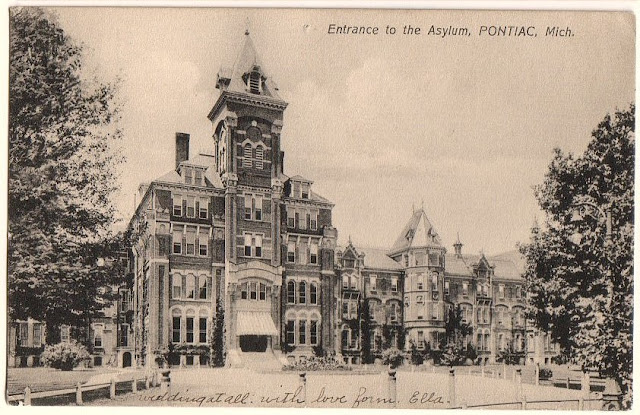 An odd enough card for anyone to send, but odder still given the innocuous message it contains. A "bread and butter letter," it's written to my eponymous father's dad George Nelson Bentley on December 6, 1909, when he was teaching in Cripple Creek, Colorado. Not exactly a picture to make him homesick, I would think. 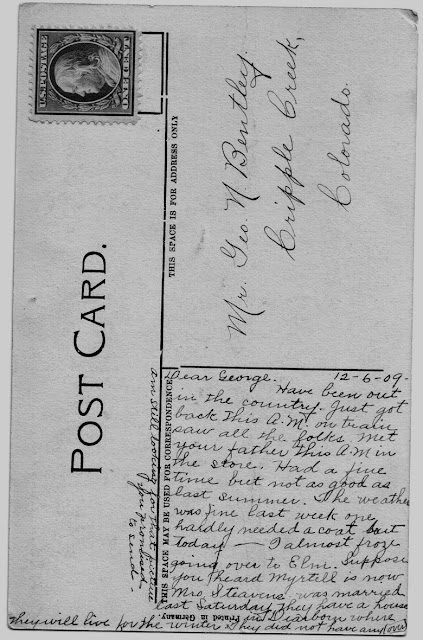 The letter's riveting climax: "Suppose you heard Myrtell is now Mrs. Steavens [? sic] - was married last Saturday. They have a house in Dearborn where they will live for the winter. They did not have any [over] wedding at all."

Shocker! I assume this refers to a Myrtell Grace Foster and John Howard Stevens, married two days earlier. But I have no idea what the relationship to my grandfather was.

It also mentions his father (John) and the store run with George's brother Clyde in the village of Elm, Michigan (now subsumed by Livonia, a suburb of Detroit). 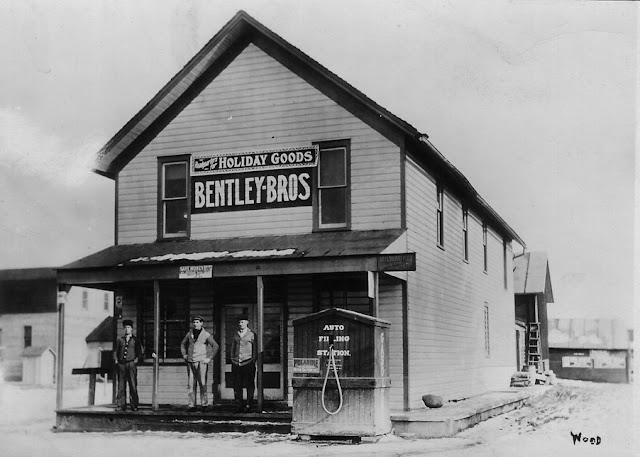 Anyway, all unsuspecting, I discovered a trove of info about the asylum. The following are borrowed from them... 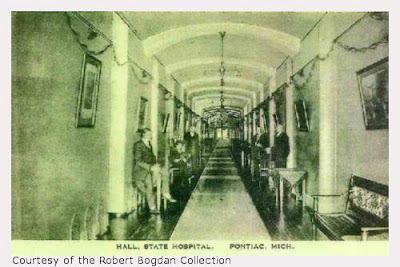 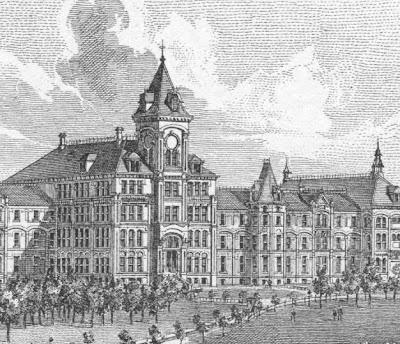 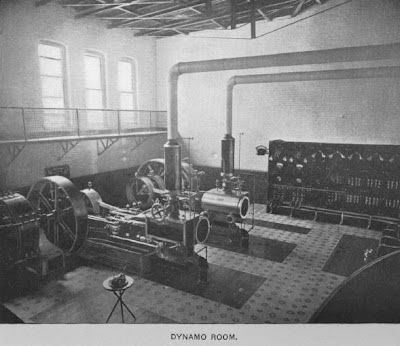 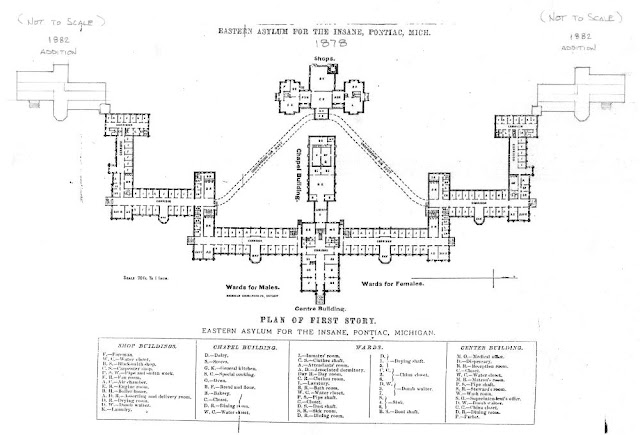 My mother, now 90, excitedly phoned me to say she'd stumbled on an envelope full of old postcards in a drawer. They turned out to be my late father's collection, including a few that were sent to his parents in the early 1900s. Here's the first of what promises to be several posts about some of my favorites, by and large hand-tinted. For starters here are some souvenir cards from various exhibitions.

At age 21, my father Nelson uncharacteristically traveled, apparently alone, from rural Michigan to the 1939 World's Fair in New York. I like the abstract schematic nature of this card, partly because it's such an ironically unsatisfying view of the Fair! It looks sort of like a pizza that's been steamrollered.


The postcard caption is a bit unclear but it appears that this is a photo of a model of the fair rather than an aerial photo of the actual fairgrounds. On the reverse side you can see his typical flamboyant pencil calligraphy as he updates his mother on his whereabouts. 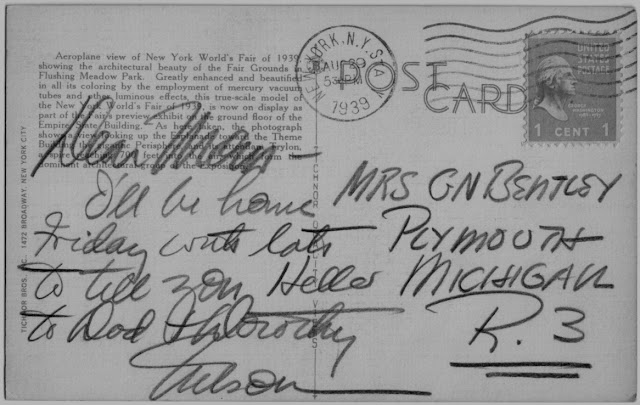 Late the previous year, his friend Frank visited the same fair. Despite the "welcoming" statuary, I find this facade rather stark and monolithic.


Note the post office's admonition to "address your mail to street and number." Frank was good about this but Nelson, as you can see above, not so much. 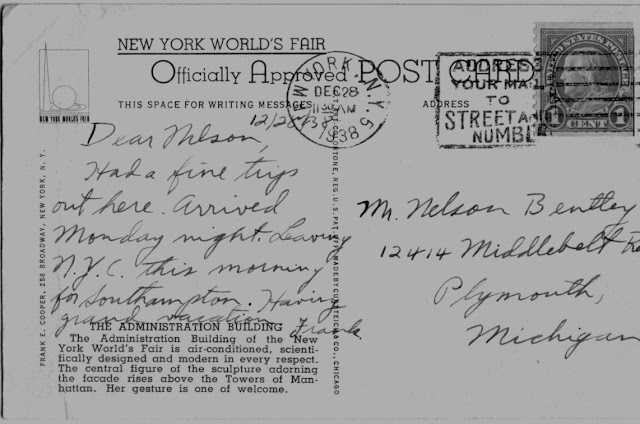 A few years earlier still, Nelson's baby sister Margaret visited another exposition. I love the Art Deco architecture. I wonder if the blimp was really there or just added by an artist; it lens a rather "Metropolis" air to the picture. This is the year before the Hindenburg disaster...


She refers to "we all" and as she was only 15, I assume she went with their elder sister Dorothy and father George. My grandmother was probably unable to travel due to her chronic tubercular condition and Nelson stayed to care for her. 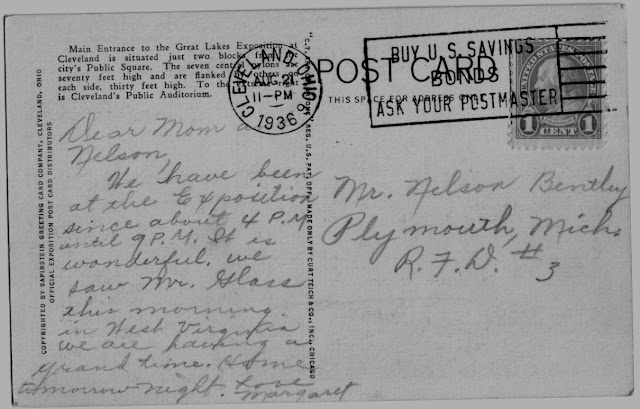 By the time Nelson got to New York, his friend Frank had traveled to California. Here the architecture seems to meld Deco with Greek and Assyrian, neither of which have much to do with the Pacific Basin! 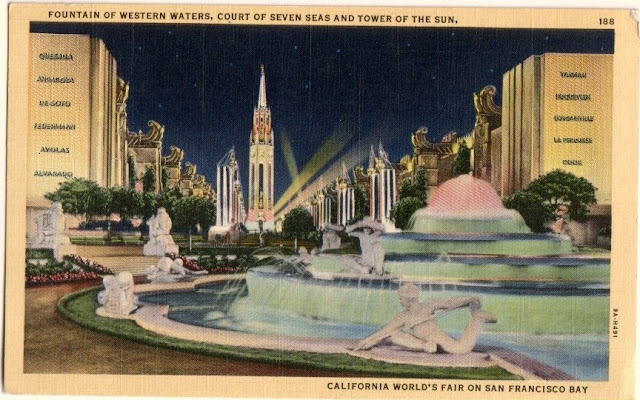 The names on the buildings aren't very legible but include De Soto, Federmann, Alvarado, Bougainville, La Perousse, and of course Cook.

Note that by this time my father has moved to Ann Arbor, Michigan, attending the University. 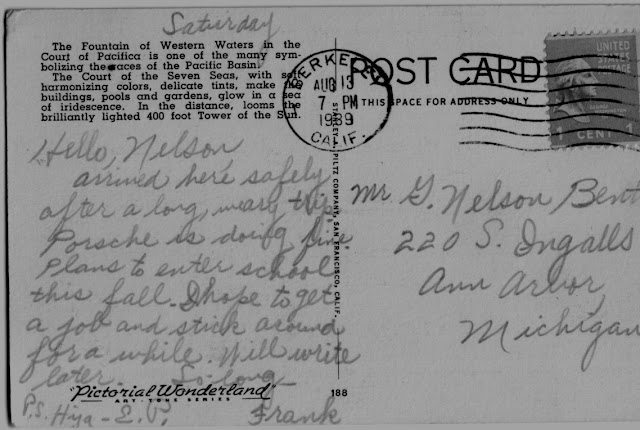 Be sure to check out the Sepia Saturday site.
Posted by Sean Bentley at 9:16 PM 12 comments:
Email ThisBlogThis!Share to TwitterShare to FacebookShare to Pinterest
Labels: nostalgia, postcards, sepia saturday

Third post in a row about painting! What's up with that?

...Finding myself with a spare 45 minutes to wander downtown Seattle's historic and (therefore) somewhat seedy "Regrade" area, aka Belltown, I meandered down several alleys and to my surprise stumbled on this hidden cloister of graffiti art. The regrade deserves a Sepia Saturday post, but for now...enjoy this psychedelic splattering. I particularly enjoy the inclusion of the small panes in the whole design. 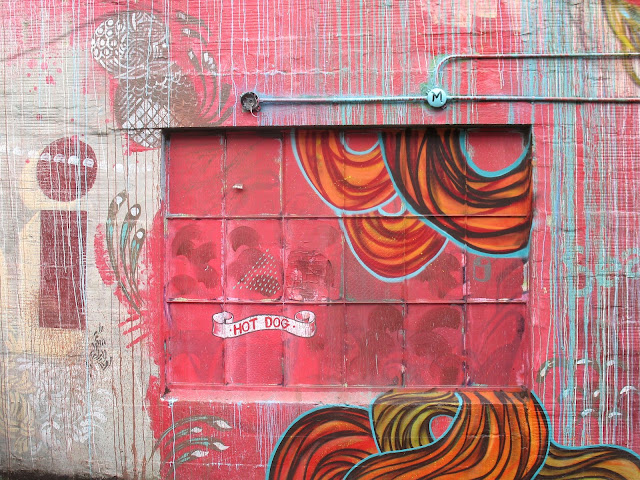 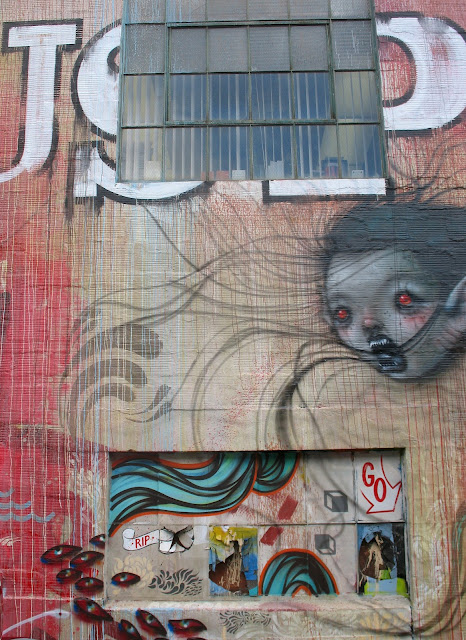 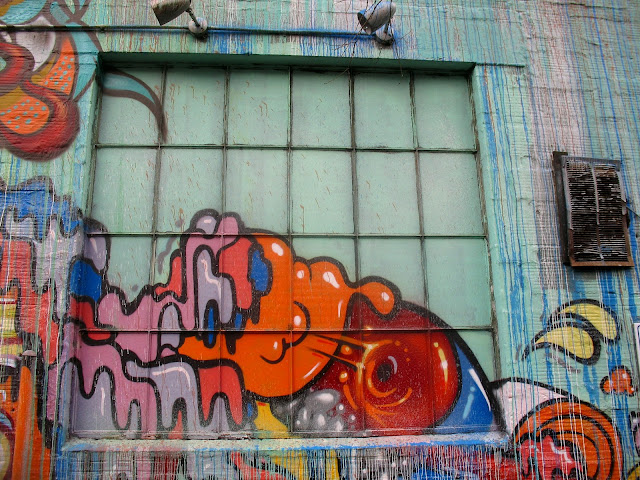 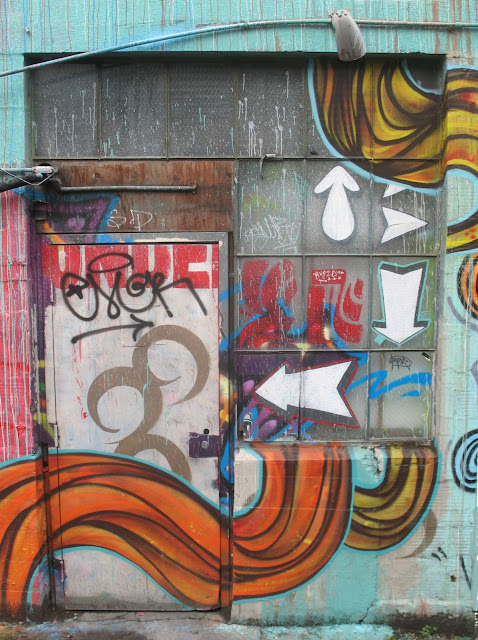 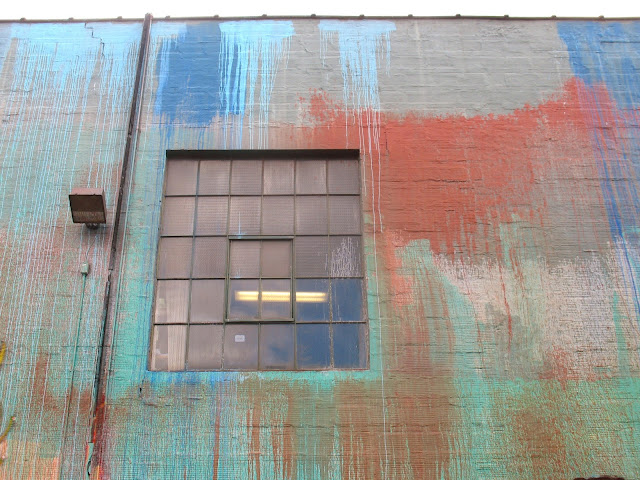 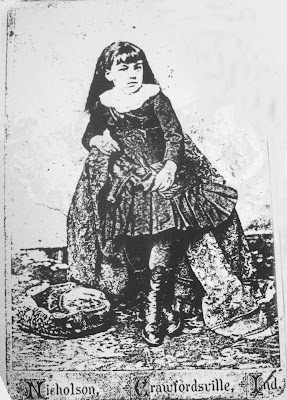 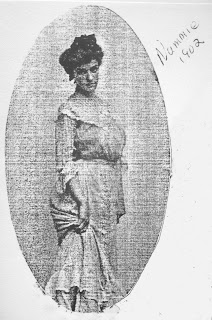 This week's Sepia Saturday post focuses on another of my wife Robin's relatives, Mary Wealthy Kimball (1876-1969), or as she was later known, Mary "Nammie" Morris.

Quotes are from newspaper articles (publication unknown). Apologies for the look of this week's illustrations, they're all photographs of photocopies of photographs! 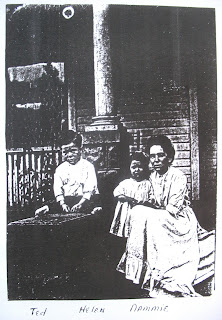 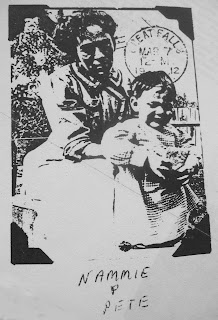 '"All of my children were grown, and there I was in Deer Lodge with my husband, with nothing much to do but sit in the apartment and stare out the window at Mt. Powell... I saw the mountain and right then decided to paint it.'"

'Mrs. Morris bought paint and brushes, ripped up some pasteboard boxes to use as canvas, and began to paint. Four months later she returned to Great Falls with a good stack of paintings.'


'She was a little skeptical as to the artistic value of her work until she discovered the man who had packed her furniture had made off with about half of them.'

Following this episode, she studied under a local teacher, and every winter from 1937 to 1946 traveled to California to work with Jack Wilkinson Smith, "a landscape artist and close friend of Charles Russell."

'Smith...gave her Russell's corner of the studio...to work in, when he discovered she had also known Russell.'

'"My mother was an artist," she explained, "and when I was little I used to walk around paint so much I just absorbed it."'

'"Every minute I don't paint, I feel time is lost. I used to play cards and go to parties a lot. But not anymore.  If you want to paint, you have to give up things."'

'Mrs. Morris painted 8 hours a day 7 days a week for many years but on doctor's advice has cut this down to about 3 hours a day. "I get all wrapped up in my painting," she said, "and to quit is about like pulling teeth." Her favorite subjects are mountain scenes, though she has a weakness for barns and other farm buildings. But mainly she prefers scenes that are overwhelming. Pictures of cows in the pasture, and the like, are not for her.'

Sometime in the 1930s, her first grandchild, John Martin Morris, dubbed Mary "Nammie" and the name stuck. Her family "never knew exactly when she was going [to paint], as she packed for weeks. Then one morning we would find a note on the breakfast table saying, 'Gone to California.' "

Mary was born in Crawfordsville, Indiana. Sometime before 1893, her father Joseph Freeman Kimball bought a cooperage, but soon went broke in the "panic of '93." The family then moved to St. Louis, where she eventually met her husband Martin Luther Morris.

Mary was one of the founding members of the Women's Republican Club in Great Falls, Montanam where she had moved in 1909. She was also instrumental in organizing some of the city's first PTAs (parent-teacher associations) and the first baby clinic. 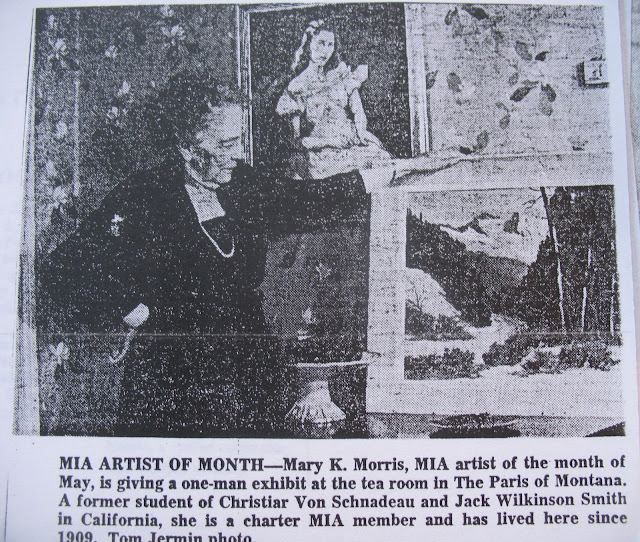 'She would much rather paint for men than women. Men select as picture because they want to sit back with their pipe and look at it. Women always have to try to match the picture to the color scheme of a room.' 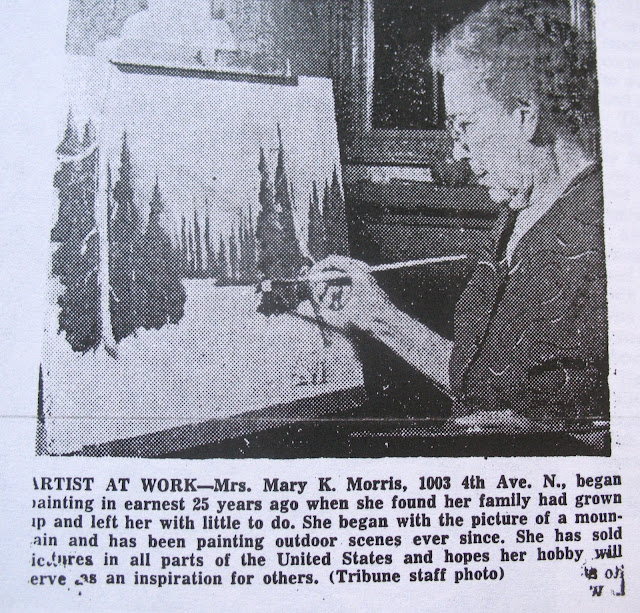