A spur-of-the-moment trip to Chehalis, Washington provided a chance to see this fabulous old drugstore wall. 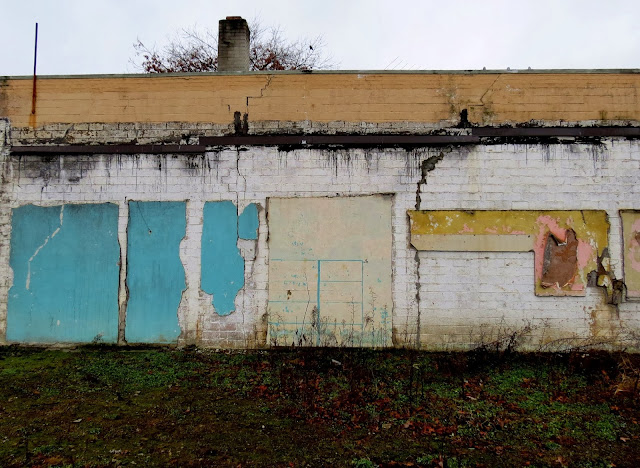 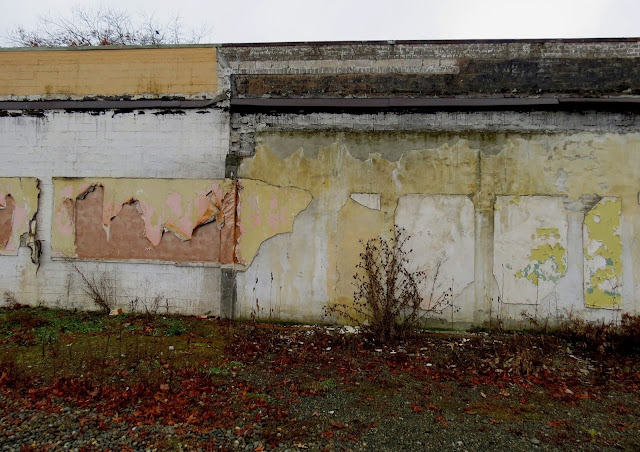 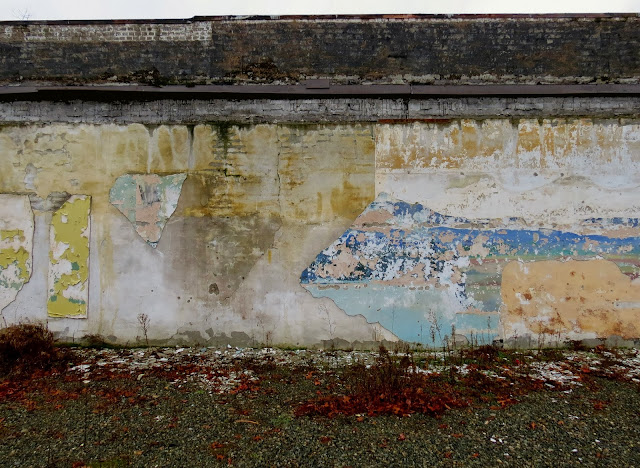 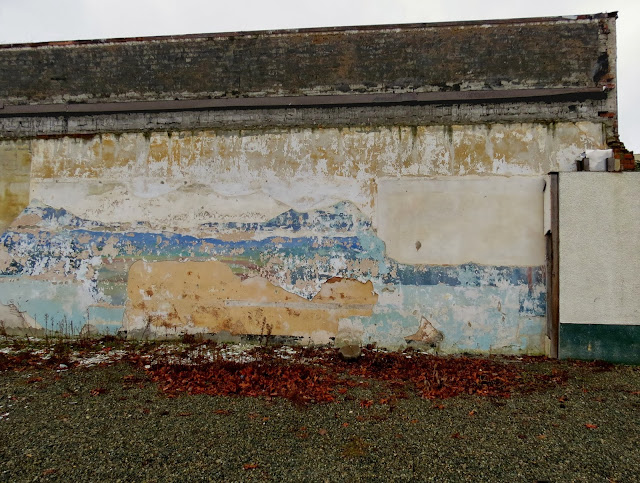 Posted by Sean Bentley at 10:25 PM No comments:
Email ThisBlogThis!Share to TwitterShare to FacebookShare to Pinterest
Labels: chehalis, walls, weathering

Ghost of Christmas Past

Here's a little holiday post in light of (among other things) this week's Sepia Saturday theme.

I (perhaps inappropriately) confessed to my local barista that holiday music, which they were playing (somewhat prematurely, I felt) at the coffee shop always made me rather sad.

Perhaps it's because I'm no longer a child. Or that my own are pretty much grown up. Or perhaps the following explains...

The abstruse cloak of the Pacific
undulates, adroit ultramarine,
below a band of fermented light where sun
has not long been down. My window's
ajar; above the fire-noise of hiss
and kindling-crack is the rush of turning tide.
Earlier, a family and hell-for-leather
pooch strode Moolack Beach; I heard the flailing
dogtag's clink even here atop the bluff.
Their reflections ghostly underneath,
they crossed a wet place on the sand, patrolling
what seemed the world's nether edge, the sky
smoke-red as Wells' fraying end of history.

I've typed the hundred hieroglyphic pages
of my father's final reminiscent poem.
He recorded his closing life, his dogged faith,
up until he could write no more, until
he could live no more. In earnest, recurrent images
enduring from childhood, he detailed his world:
vacations here in Newport, the rosy sky,
the lamp-green sea. I imagine a few of his ashes
in this water, drifted down the coast
from where we scattered him among
red-green anemones and barnacles in the La Push surf.
One year less five days since his death.

The Beyond is out beyond the window screen.
As I write by burnlight, minding the fire
like a baby or like my father in his last,
obscure, helpless days, the flames are safe
behind their own screen. Sticks and sap explode,
though tinily as stars. Each log will crush
itself. Each rages faithfully, little ash.
I attend the blaze, keeping happy flames
as wood successfully works out its own demise
and its essence billows up the flue. Last year
there were no further logs we could put on
to restore his heat and light. He kept the embers,
growing paler as the year grew to a close,
lucid through one last Christmas Eve.

My dim reflection in the window is projected
on the breakers, off-black under clouds,
(my flesh flinches) that eye some varmint's, baffled
in fiery headlights. I know that shape is me,
despite its unclear resolution. In fact,
it's more familiar than my articulate image
in the mirror often is -- or the me gray-haired
in candid photos, startling distinguished fella.

I crack open the window, snout to the screen.
I smell outside: the shore with its dead things;
the clean sea air shouldering the smoke I've made.
Three stars are excellent in their places.
I know if clouds were gone the sky would be
rigged with a whole resonant tribe of light.
But now these few are staked out like those folks
on the beach this afternoon: sentinels
at the start of something nebulous and equivocal.
Stoking resolutely their own sufficient glows.

(This poem is from my 1996 collection Grace & Desolation, which miraculously is still available from the publisher or Amazon.com.) 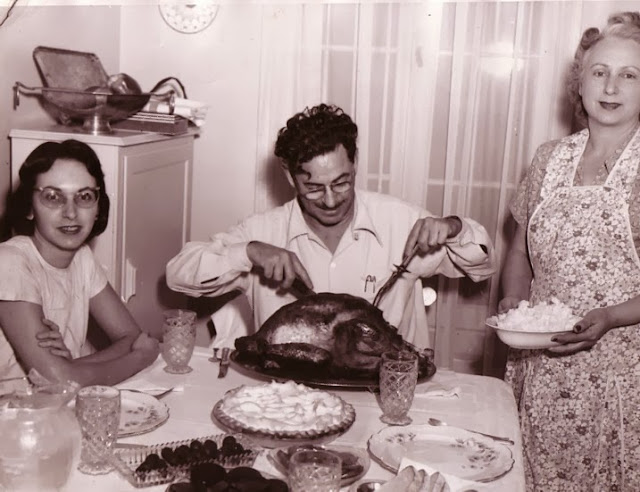 This week's Sepia Saturday theme is aprons, and (now that the purists have been satisfied with the above 1947 Thanksgiving at my grandparents' house, replete with proper apron) given my deep knowledge of warehousing, I hereby offer these studies of, well, aprons -- the concrete area where trucks maneuver up to a loading dock. 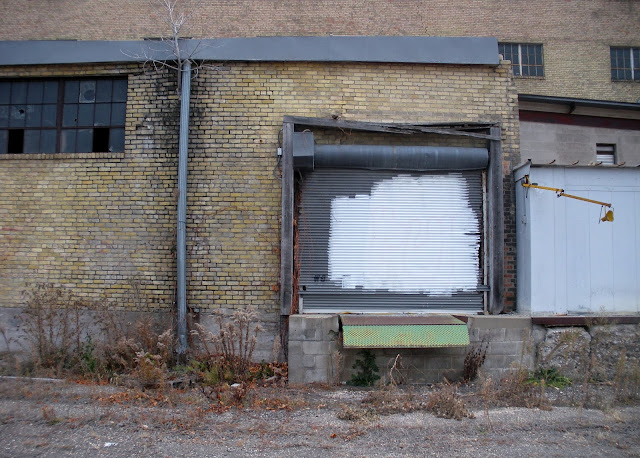 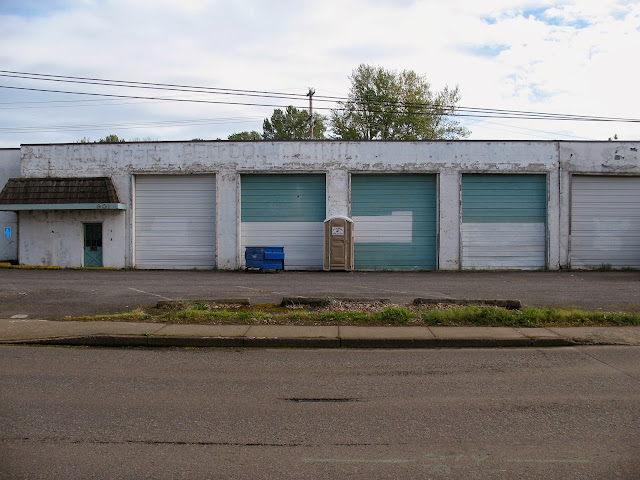 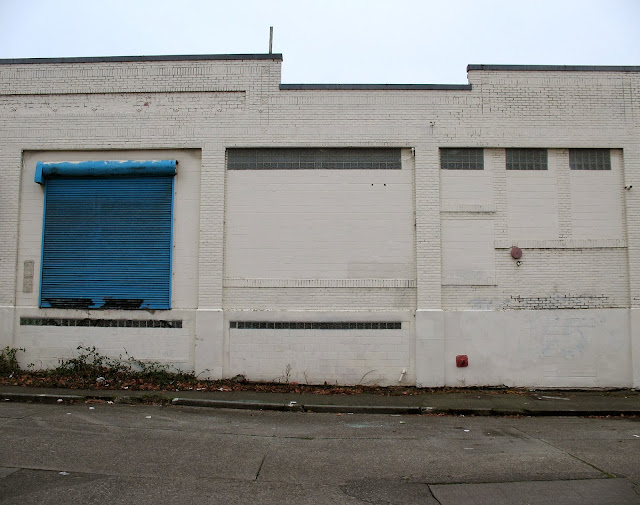 And for your vintage listening pleasure, a barely relevant song about aprons. Or their strings at least.