Wade in the water

A tip of the bathing-cap to the aquatic theme of this week's Sepia Saturday. 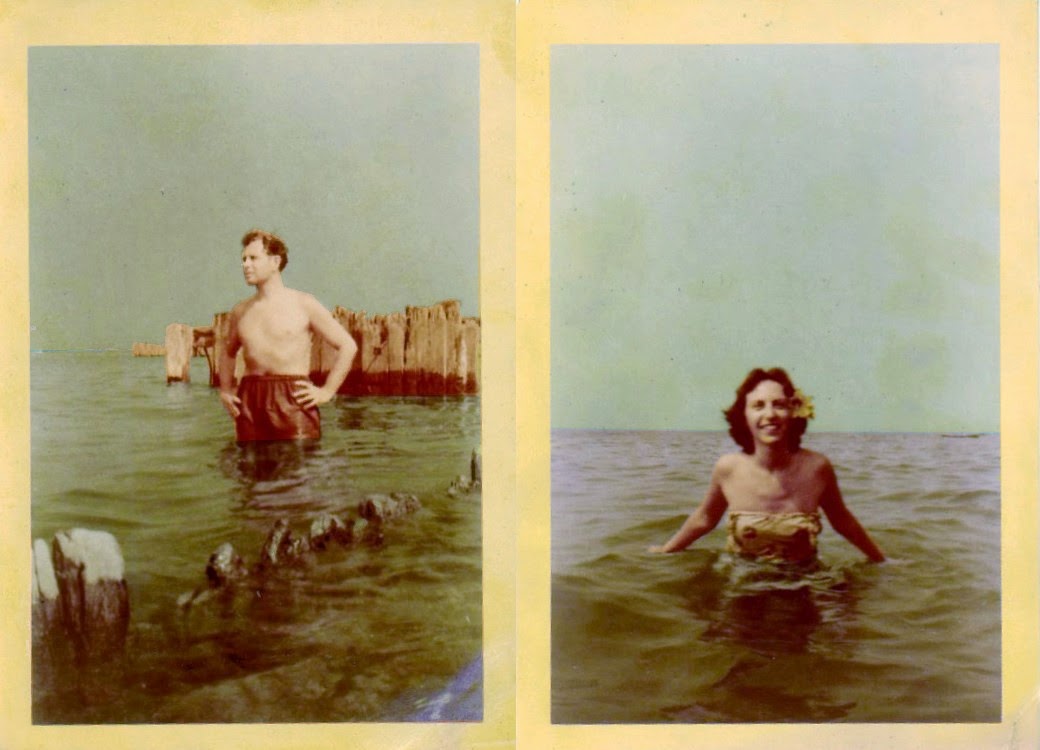 My folks, pictured deep in the land o' lakes above (Michigan), bought me this record when I was a kid -- selections from the TV folksong revue, "Hootenanny." 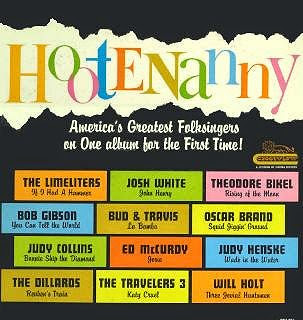 I grew very fond of several of the more upbeat folky songs on it ("Katie Cruel" in particular), but my least favorite (at the tender age of 10) was Judy Henske's rendition of the gospel song, "Wade in the Water." Between the intense lyrics and her growling performance, it terrified me.


At any rate, 50 years later I love Henske's performance. She foreshadows by several years another powerful emulator of black blues hollerers, Janis Joplin, who I also simply couldn't bear the first time I heard her, in 9th grade. (I was a sheltered child in the '60s... in addition to this record, my parents bought me Miles Davis and Schubert...an attempt, I suspect, to lure me away from the likes of Elvis Presley.)

I was quite pleased when the great '80s American band The Replacements stole the Hootenanny cover design for one of their own records.

Here are some interesting other renditions.


For more wedding content from the past, check out this week's Sepia Saturday.
Posted by Sean Bentley at 7:02 PM 9 comments:
Email ThisBlogThis!Share to TwitterShare to FacebookShare to Pinterest
Labels: lake, sepia saturday, summer, wedding, woods

The opening photo today, a nod to this week's Sepia Saturday theme, was taken from the front yard of my father's childhood home in Elm, Michigan, looking across the cow-strewn fields where a freight train smokes away down the Pere Marquette railroad...an example of the "vanishing point" effect. 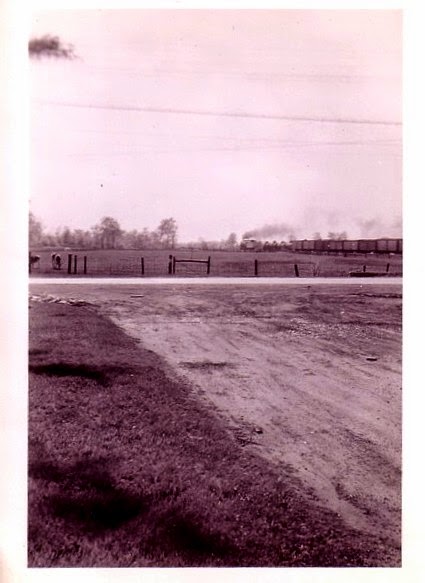 Not all that far away from Elm was the town of Hudson. And Hudson marks a sort of vanishing point for much of my family tree, where the roots disappear back into a darkish history. 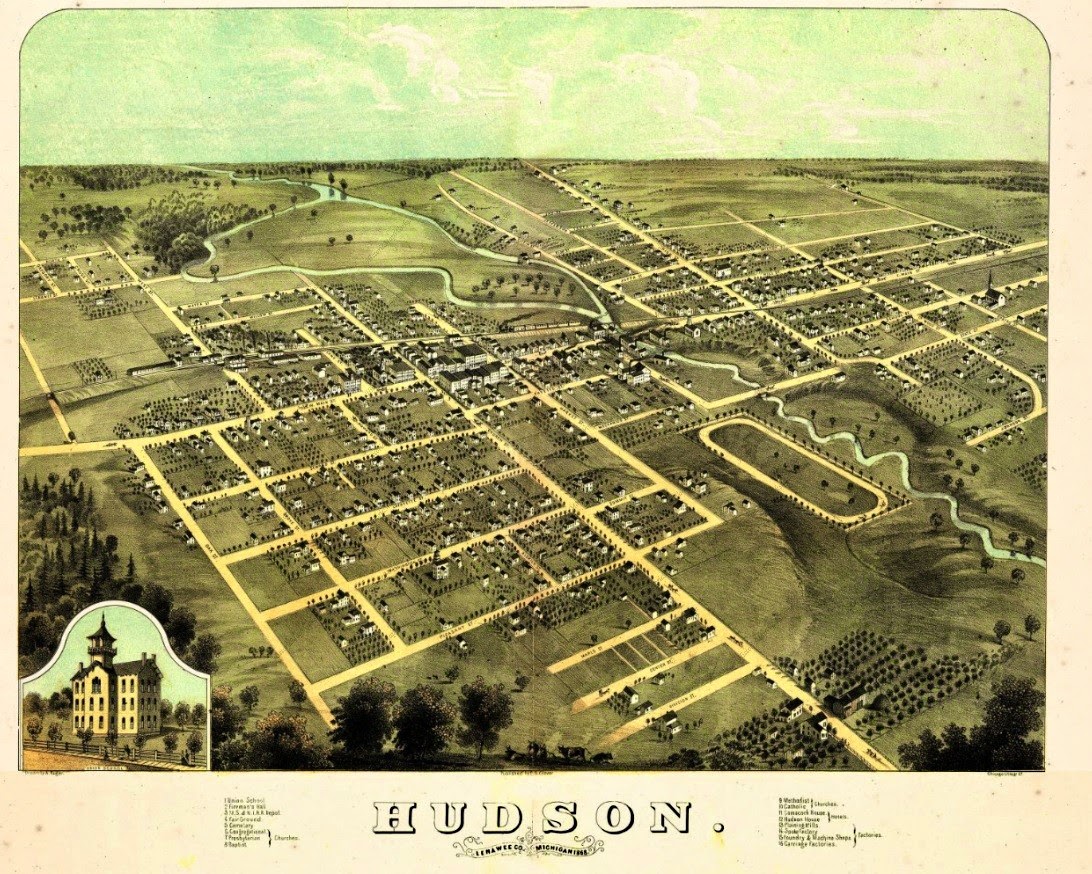 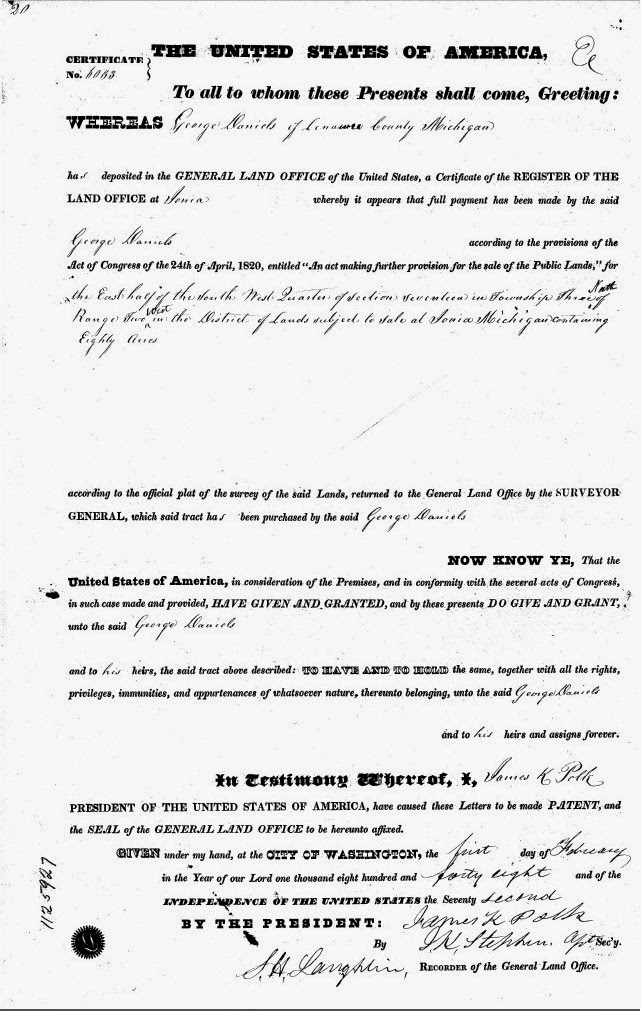 The first photo below I am guessing is a contemporary of George Daniels: Lucretia (Johnson) Hale, who was the mother of George's daughter-in-law Martha (Hale) Daniels. I make this guess based on the fact that it's a tintype (this one has no photographer imprint), and the only other such photos like it in the album are of Martha's daughters Louise and Alice, around 1876.  That was two years after the death of Henry Daniels' mother, Ann Twidale Daniels, the other likely candidate for the photo.

Lucretia would have been about 69 that year. Her husband Hiram Hale (a melodious and oddly common name, as it turns out) had been dead since 1861.
I believe the next photo is the same woman a few years later; her snood or scarf seems identical. She looks about ten years older, so if it's now around 1888, Lucretia would be 80. The young Danielses had moved from Lansing to nearby Hudson, where Henry's parents were now living, in Lenawee County, between 1870 and 1880. 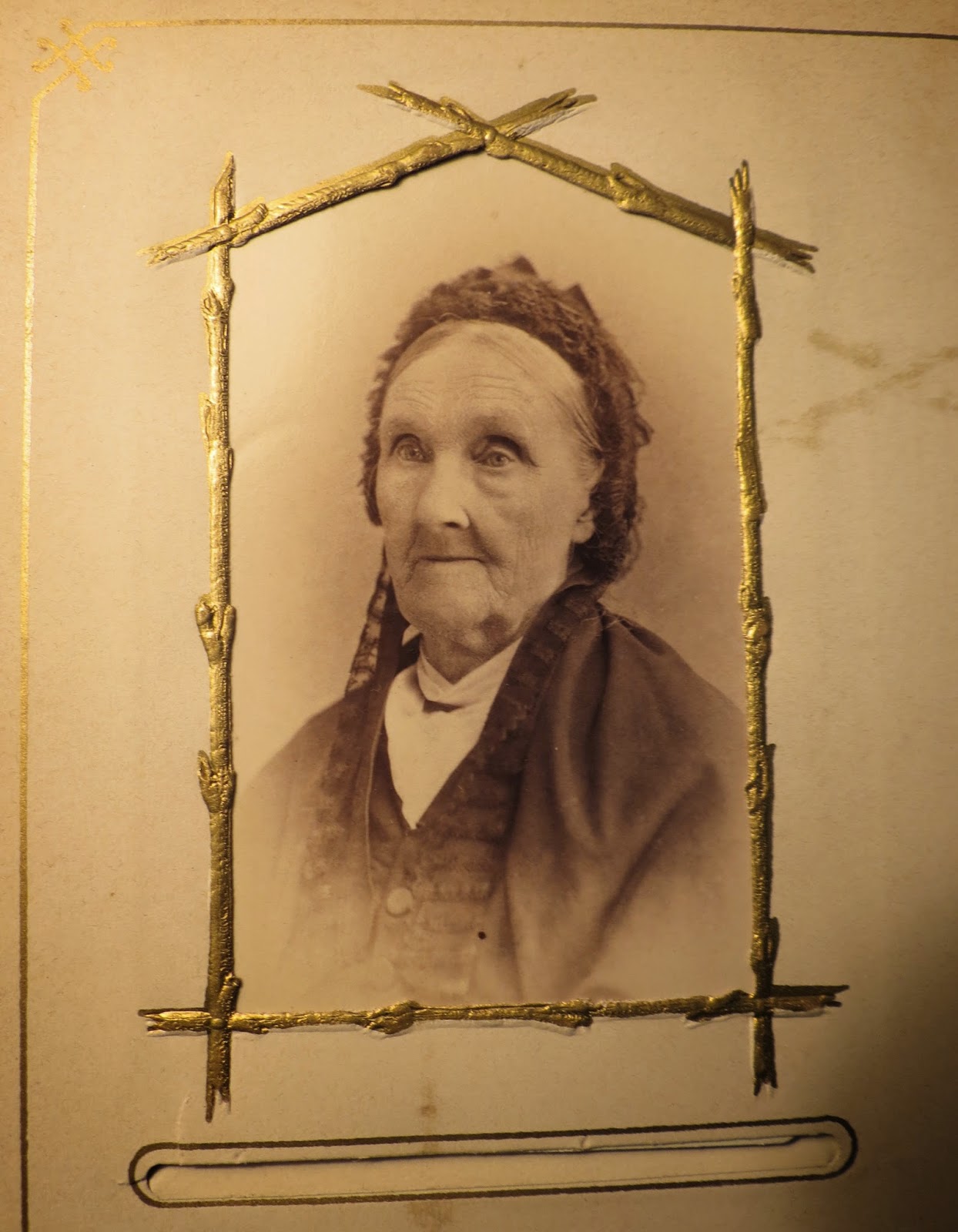 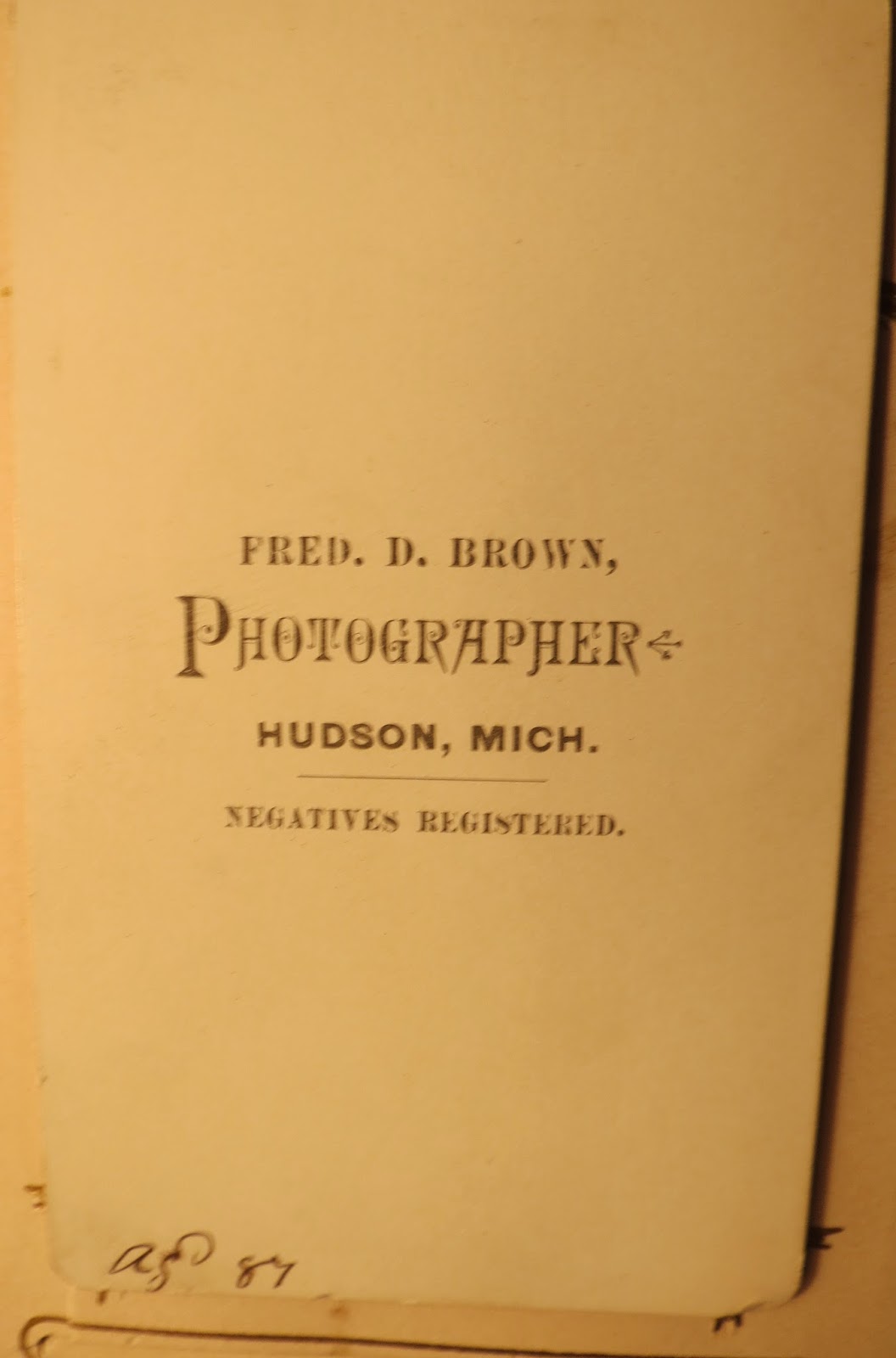 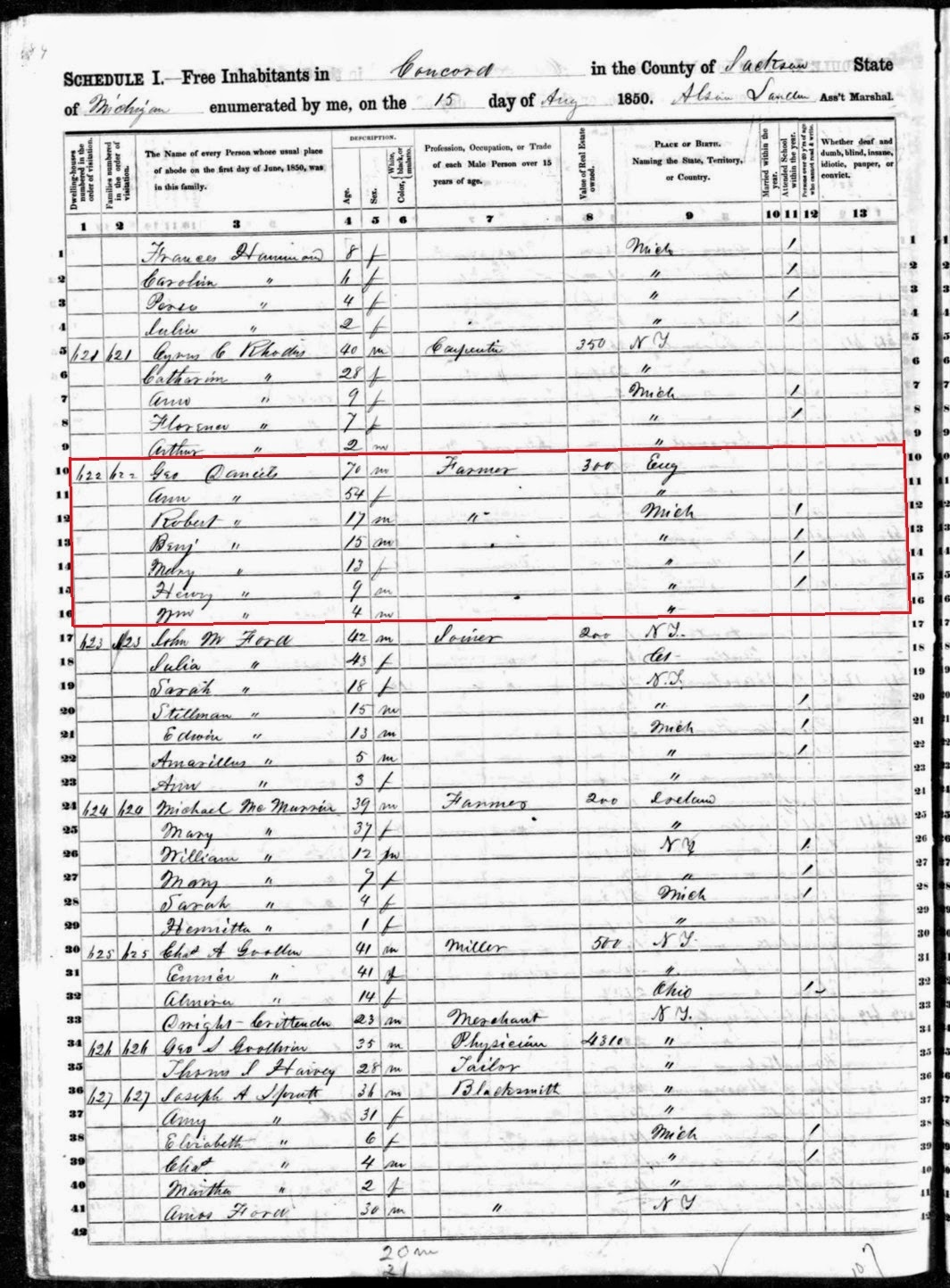 It was a goodly sized family living in Concord as of 1850. The following photos, probably taken 20 years later, are possibly Henry H. Daniels' siblings Mary, b. 1837; Robert, b. 1833 MI; Benjamin, b. 1835; and/or William b. 1846. But no solid evidence exists aside from the photographer's location (Hudson being quite nearby) . 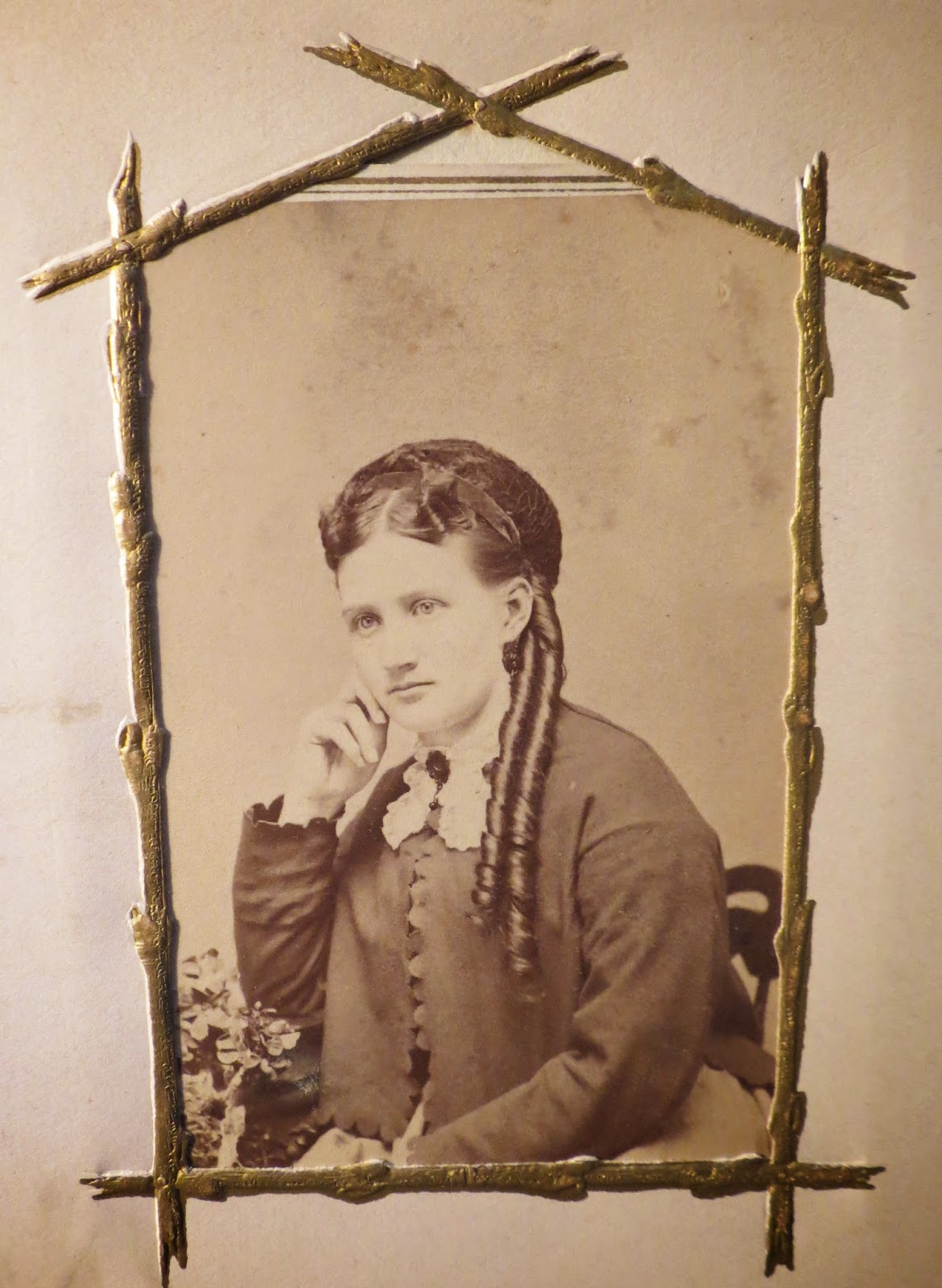 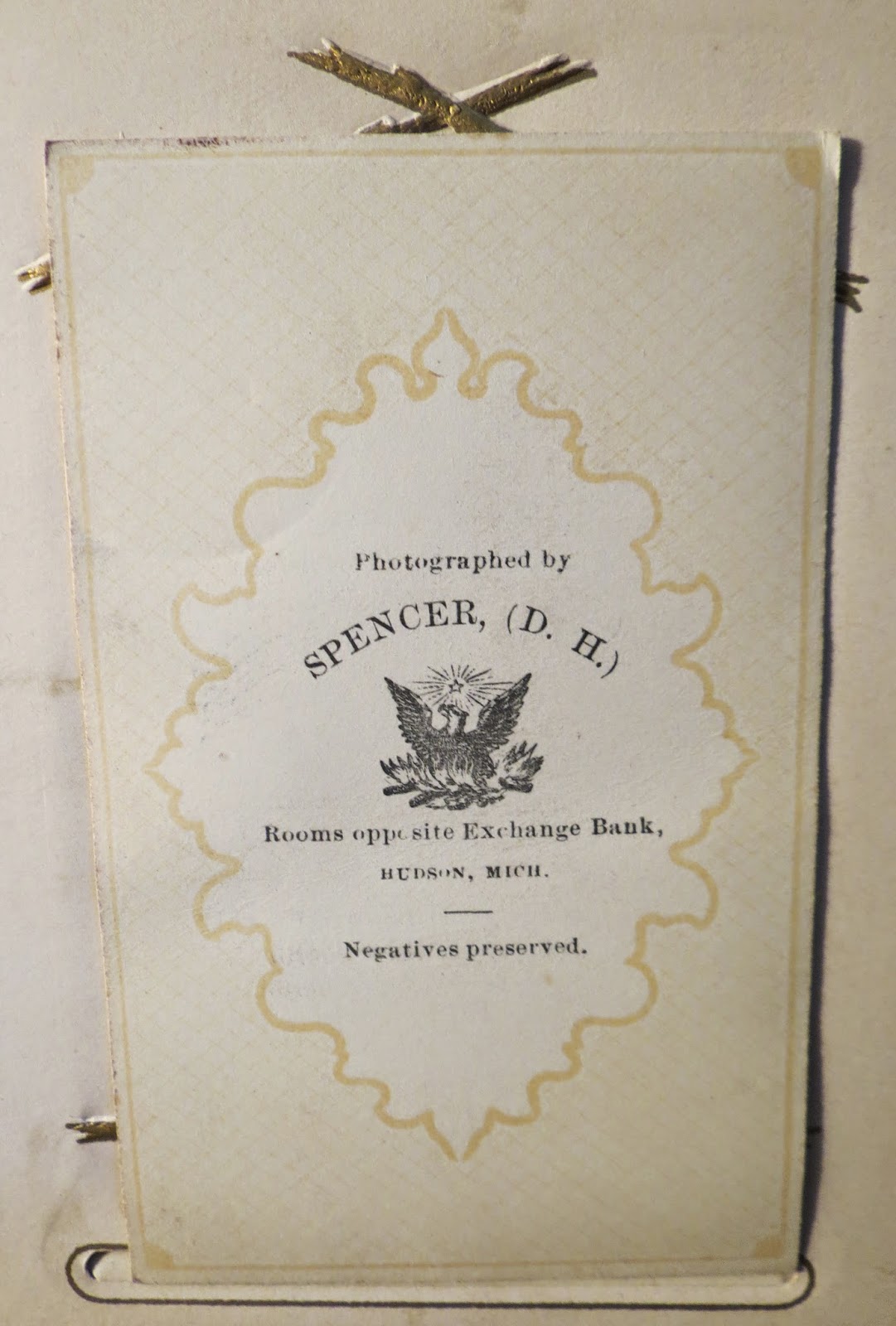 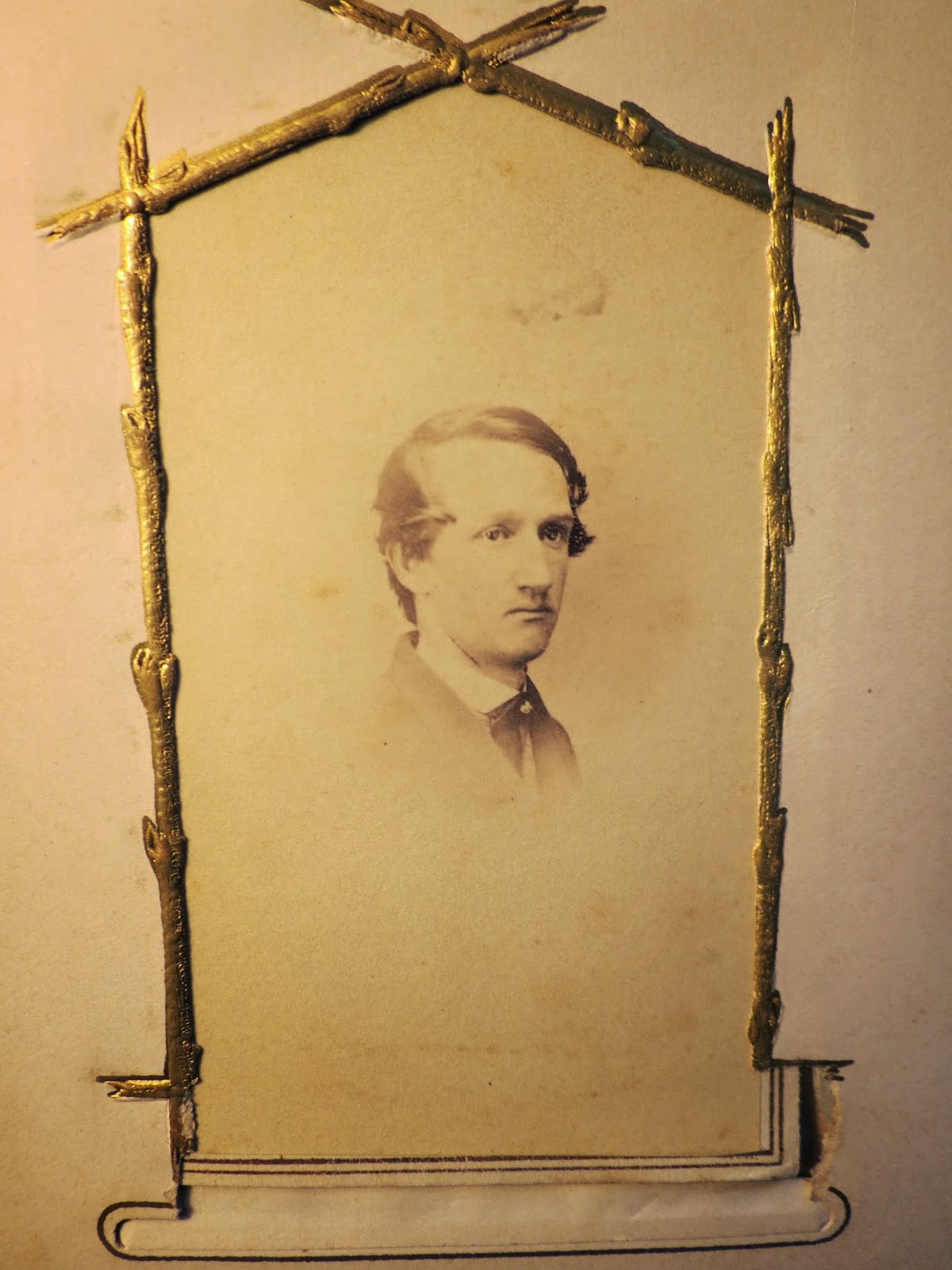 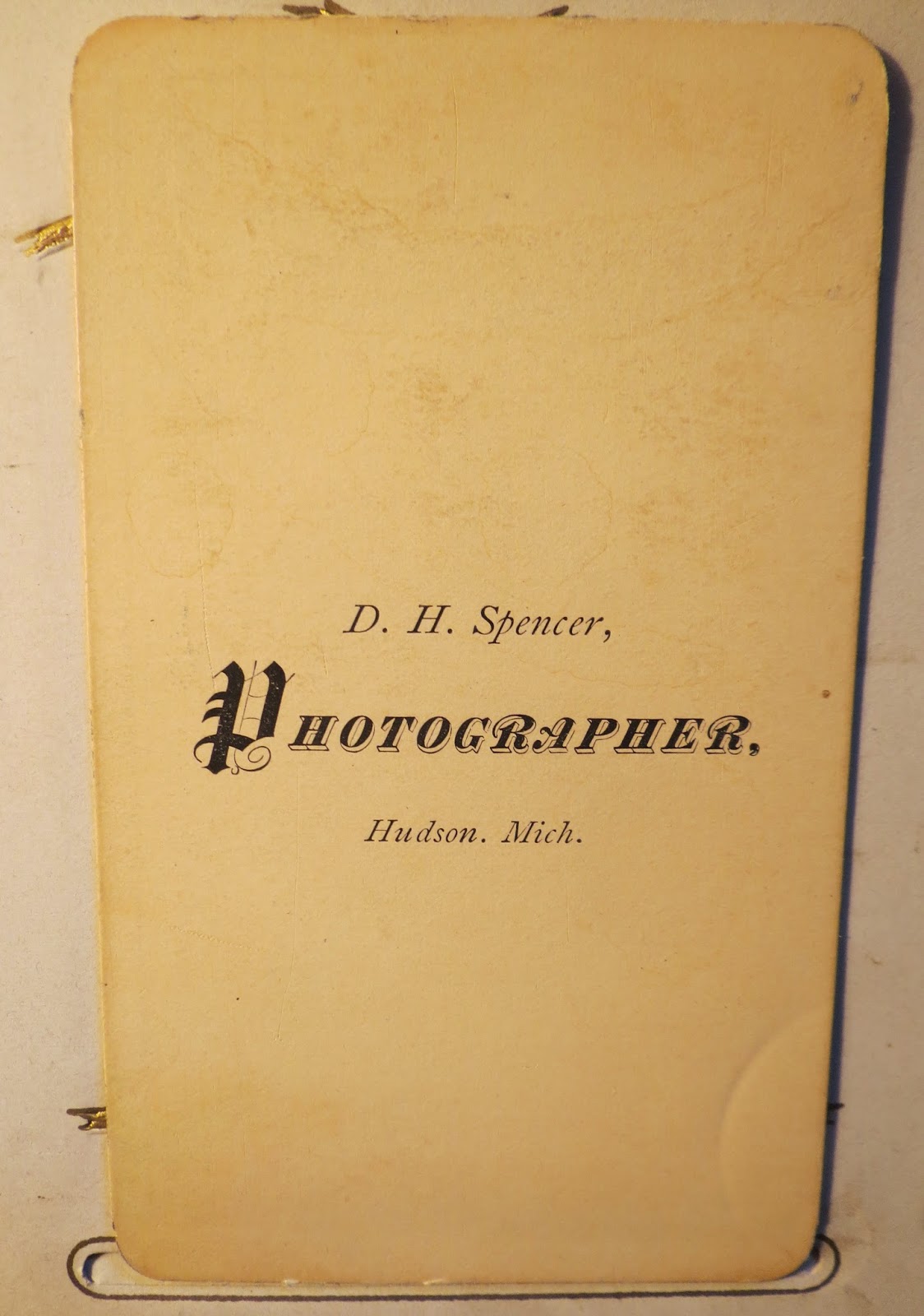 This guy looks to be about the right age to be Robert or Benjamin if this was taken in 1876. On the other hand, he bears a resemblance, especially in the mouth, to Martha Hale Daniels. Like George, she had three brothers and a sister: Andrew (b. 1837),  Benjamin (b. 1835), John (b. 1845), and  Alice (b. 1848) ... Still, everyone looked so "down in the mouth" in these portraits, it's hard to tell!
Posted by Sean Bentley at 6:35 PM 14 comments:
Email ThisBlogThis!Share to TwitterShare to FacebookShare to Pinterest
Labels: bentley, blindberry, blumenfeld, bredin, daniels, genealogy, hale, loss, michigan, orr, sepia saturday, singer

The Captain and the Captain's Wife

Henry H. Daniels was my paternal grandmother's maternal grandfather -- that is, my father's mother's mother's father. There's a nice sort of symmetry about that. He was born in Michigan in 1840, of English immigrants George Daniels (Lincolnshire) and Ann Twidale (Yorkshire). At this point I know very little about his family, but I know the following, thanks to 2nd Michigan Volunteer Infantry web site:

His wife was Martha L. Hale, born around 1842 in New York state.Bentley family lore had it that she was related to the famous American patriot Nathan Hale (1755-1776). However, records are very spotty and inconsistent; it appears that her father, Hiram (1805-1861), was the son of a Nathaniel Hale (b. 1758), and I so far can't get the dots to connect. Oh well! At any rate, she looks a bit dour, doesn't she? But obviously she was in Henry's heart during the war -- and he looks pretty wistful about it (I'm assuming he's getting ready to leave for duty, with his Sergeant's stripes). 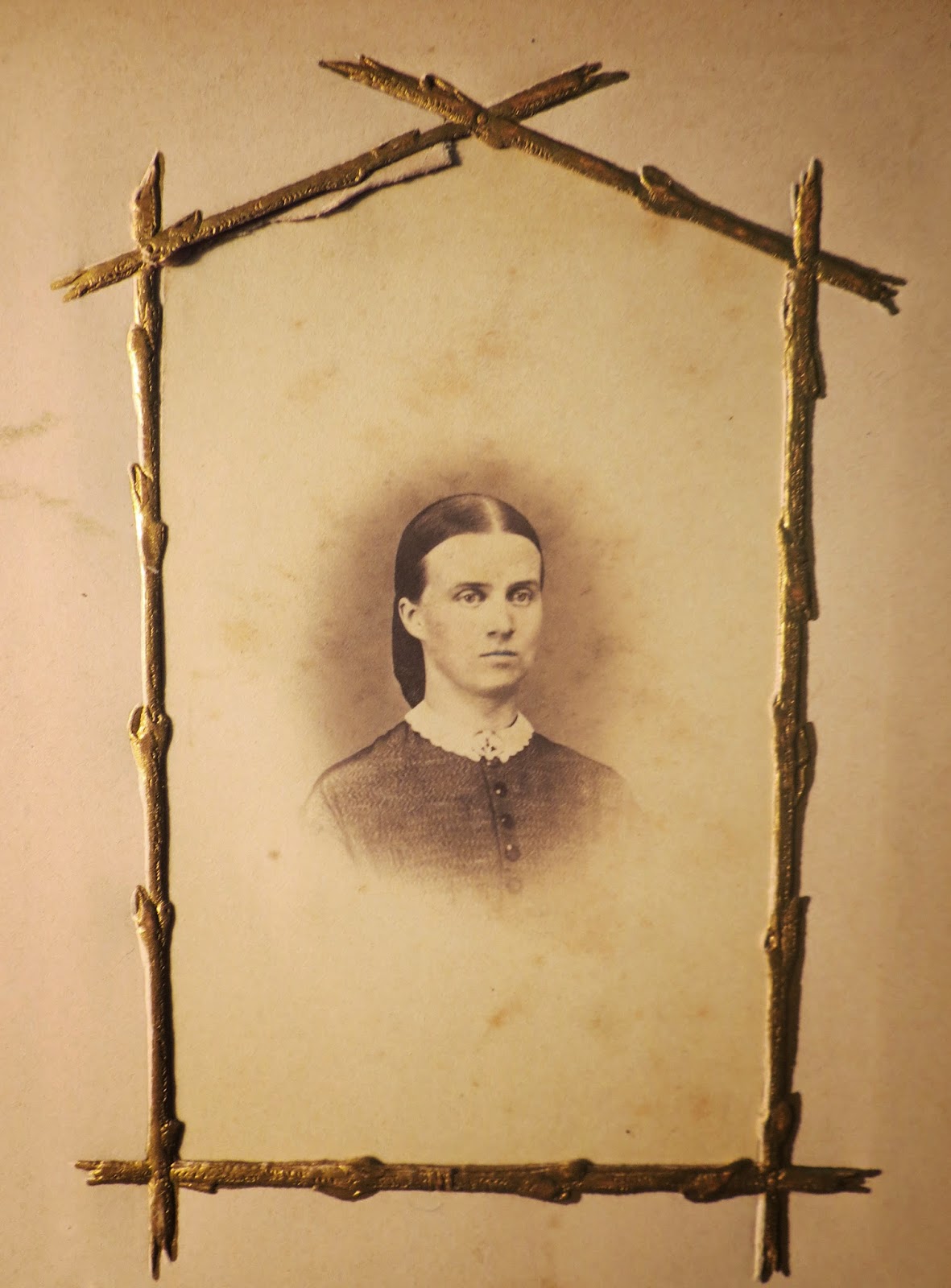 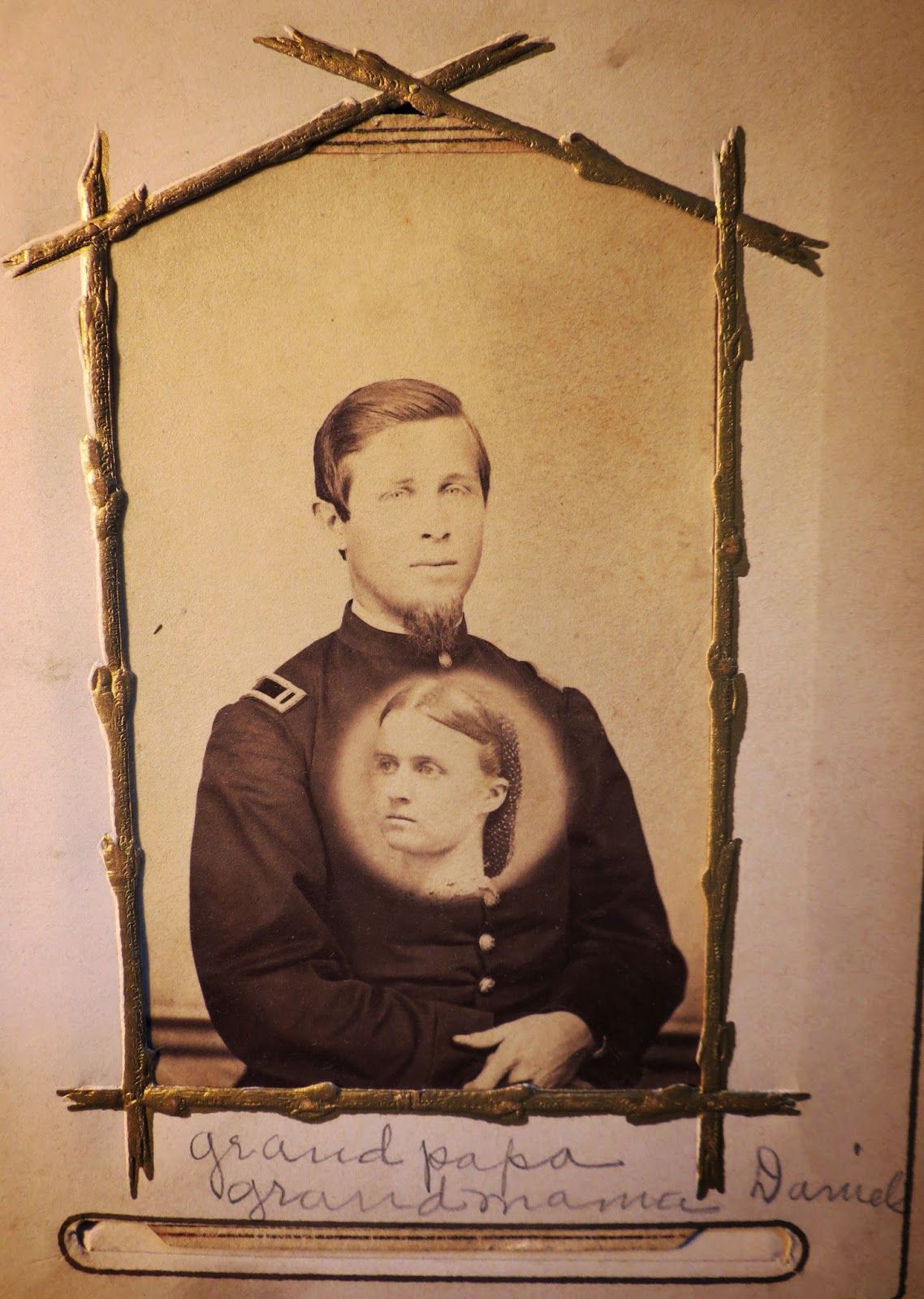 This book briefly lists the actions of the 2d Infantry... 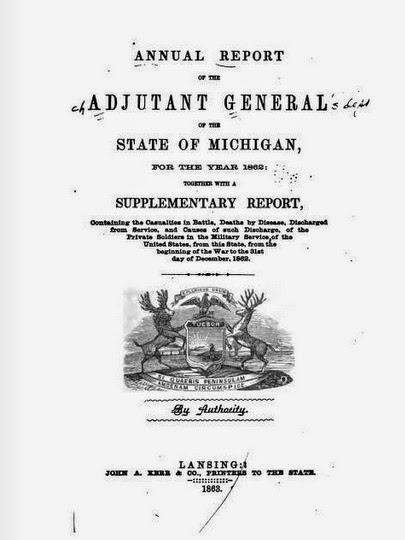 "This Regiment left Detroit on the 5th of June, 1861 — the first of the three years' Regiments in the field from this State — with an aggregate force on its muster rolls of 1,013, to which 102 had been added previous to the 1st of July. Its first engagement was at Blackburn's Ford, Va., July 18th, 1861. During the winter it lay near Alexandria, Va., and in March was moved under McClellan to the Virginia Peninsula. It took part in the siege of Yorktown; in engagements at Williamsburg, May 5th; at Pair Oaks, May 21st; at Charles City Cross Roads, June 30; at Malvern Hill, July 1; and at Chantilly, September 1. Its casualties at Williamsburg were 17 killed, 38 wounded, and 4 missing; at Fair Oaks, 10 killed and 47 wounded. Major General Israel B. Richardson, who entered the service in this war as commanding officer of the 2d, when it was organized, died in October last, of wounds received in the battle of Antietam, in which he commanded a division of Union forces. On the 30th of November the aggregate of the Second Infantry, present and absent, was 642. It is in Burns' Division off the ninth army corps of the army of the Potomac..."


Here are the Danielses some years later in Cripple Creek. Henry took his daughters Alice and Louise west and joined the mineral rush like his inlaws-to-be the Orrs, in the Colorado mining industry. 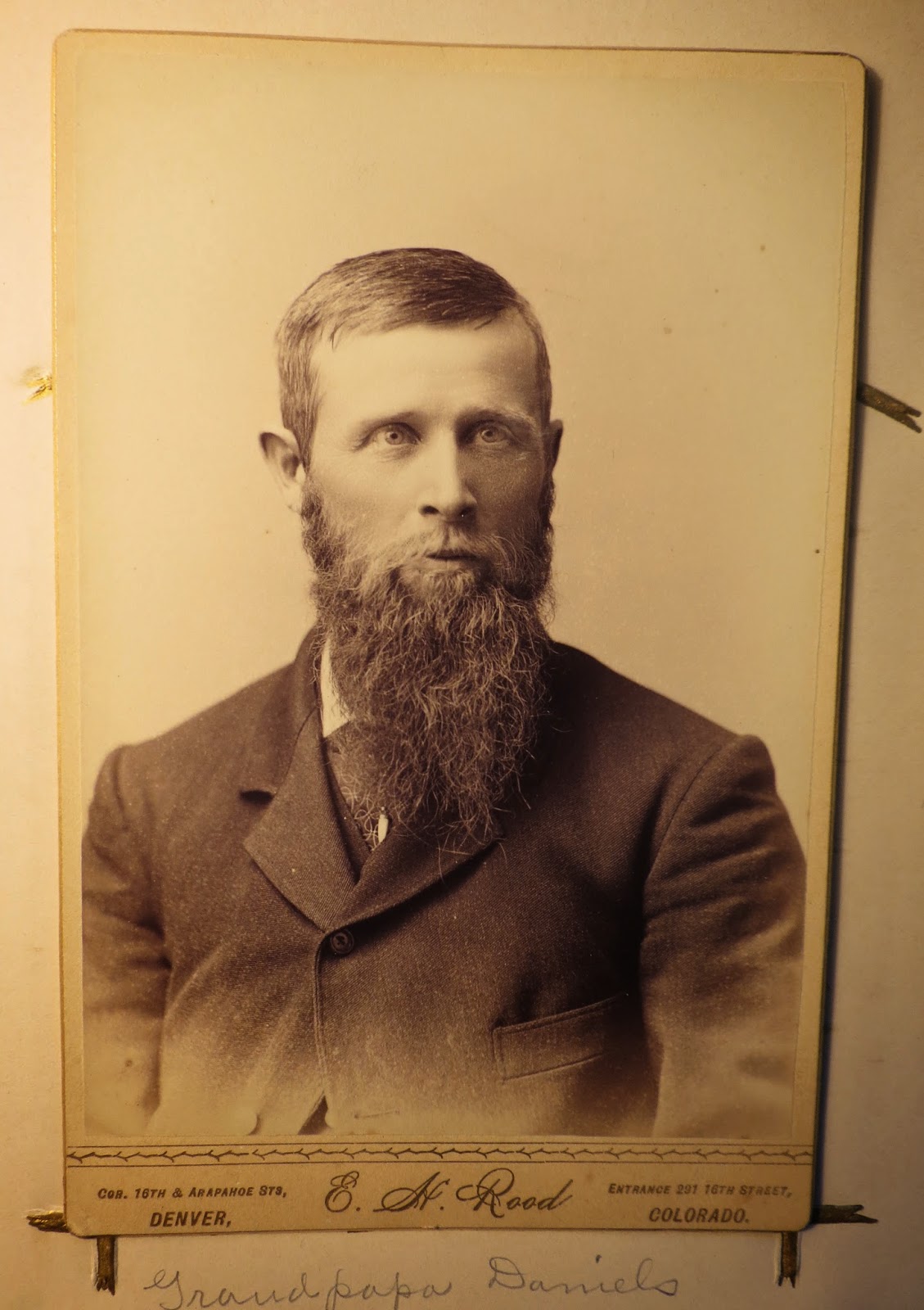 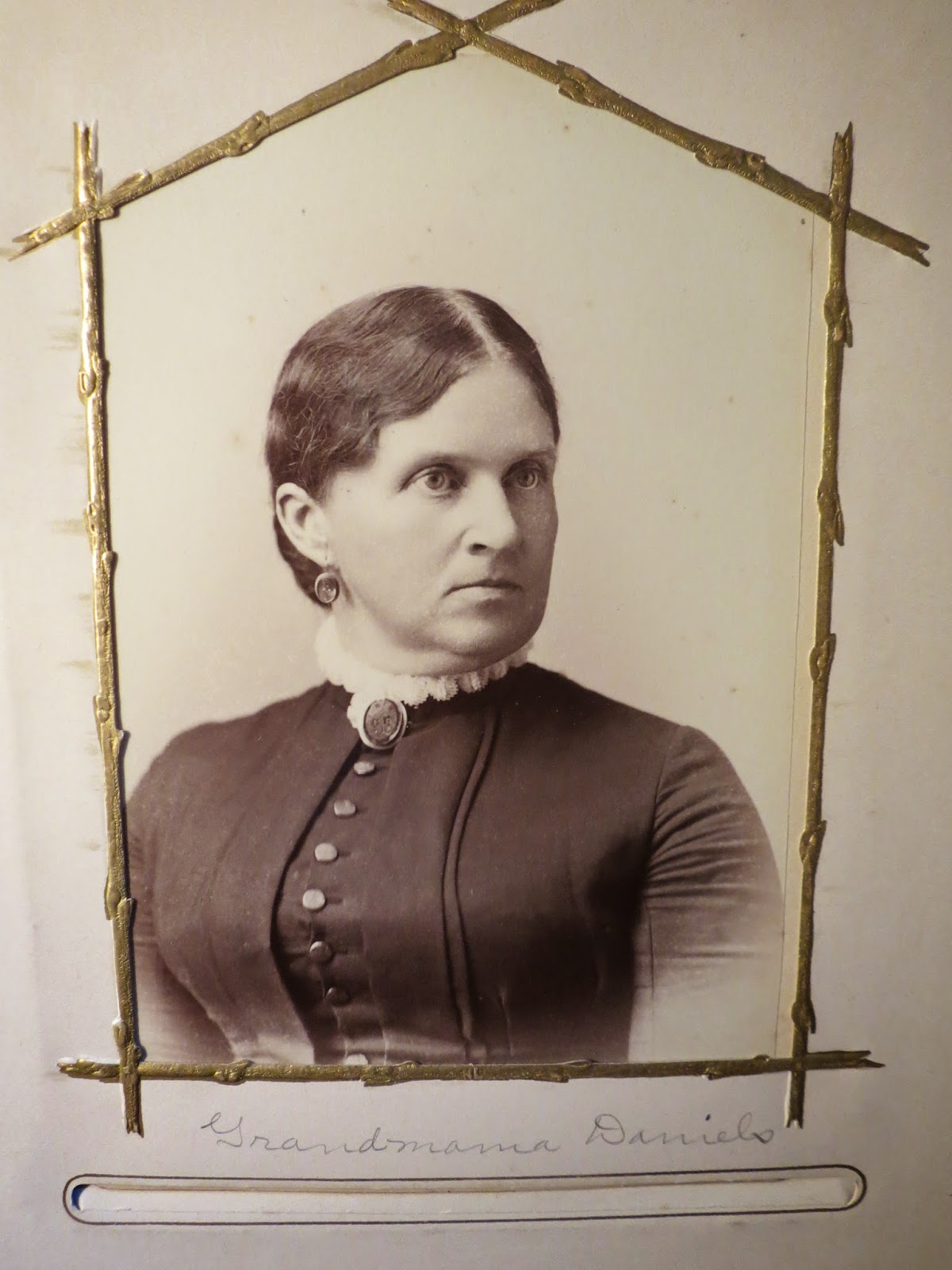 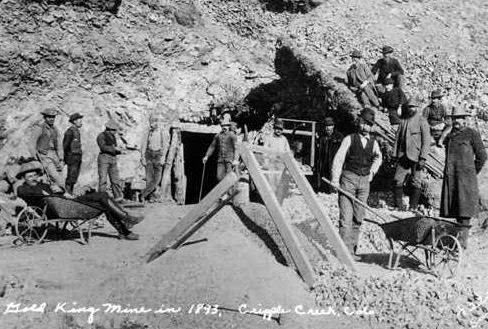 There are some great photos on MiningArtifacts.org. 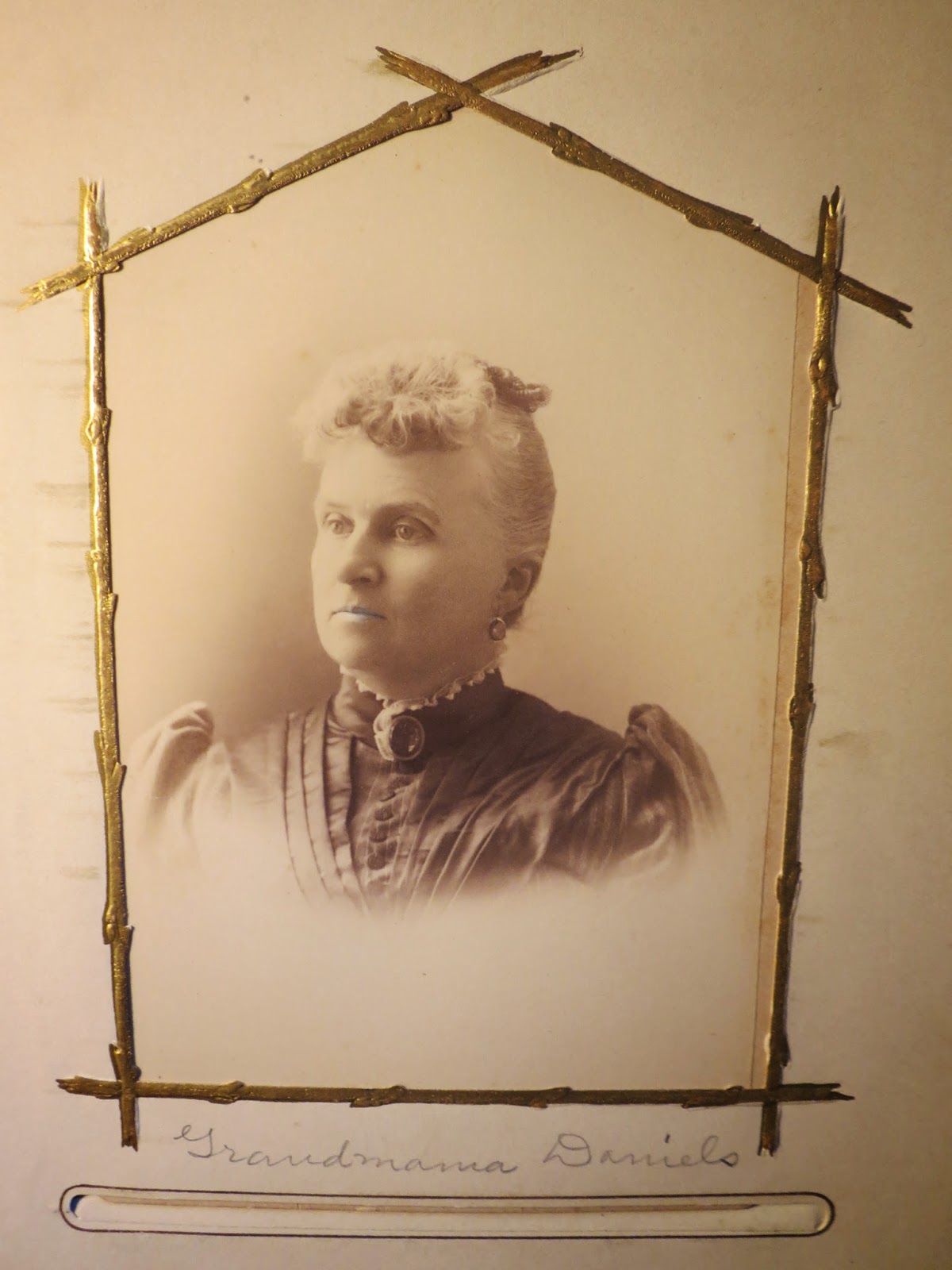 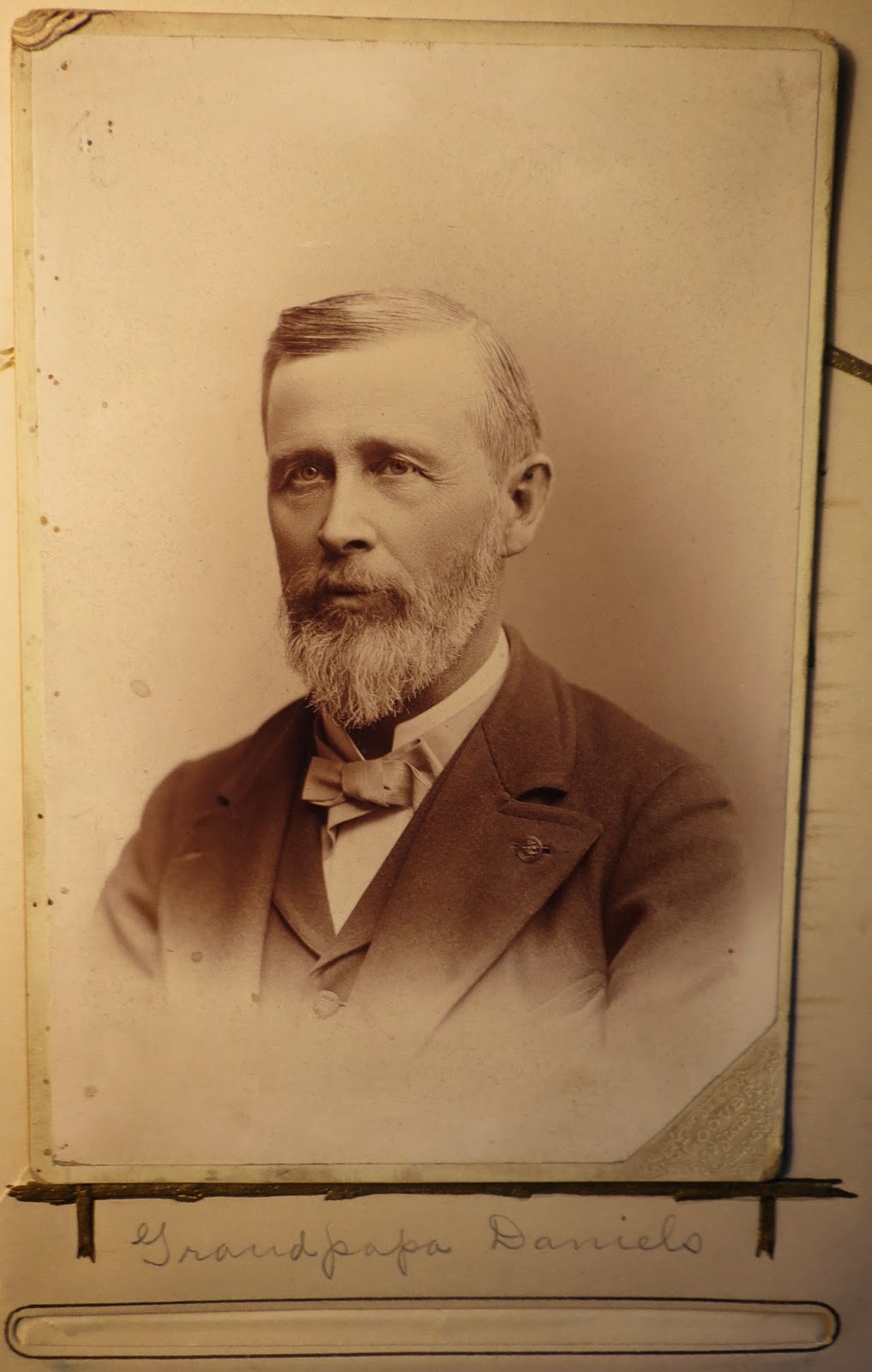 Perhaps surprisingly Henry is buried in Oakland, California, but his grandson Hugh wound up as an Oakland attorney. So there you go.

Finally, I just discovered a distinguished-looking Henry in the gloriously titled "Representative Men of Colorado in the Nineteenth Century: A Portrait Gallery of Many of the Men who Have Been Instrumental in the Upbuilding of Colorado, Including Not Only the Pioneers, But Others Who, Coming Later, Have Added Their Quota, Until the Once Territory is Now the Splendid State." (Rowell Art Publishing Company, 1902 - Colorado - 272 pages) Outside of this honor I can't find evidence of what made him so "instrumental," but I'll take their word for it! 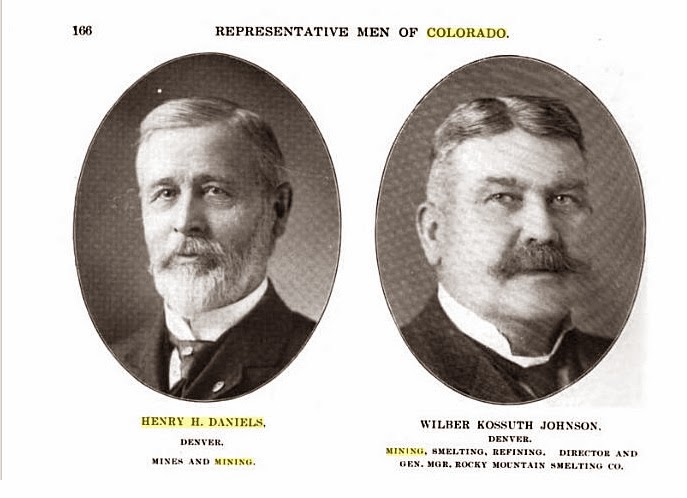 Reference sites include Michigan In the War, Find a Grave, and FamilySearch.