Happy 98th birthday to my mother! 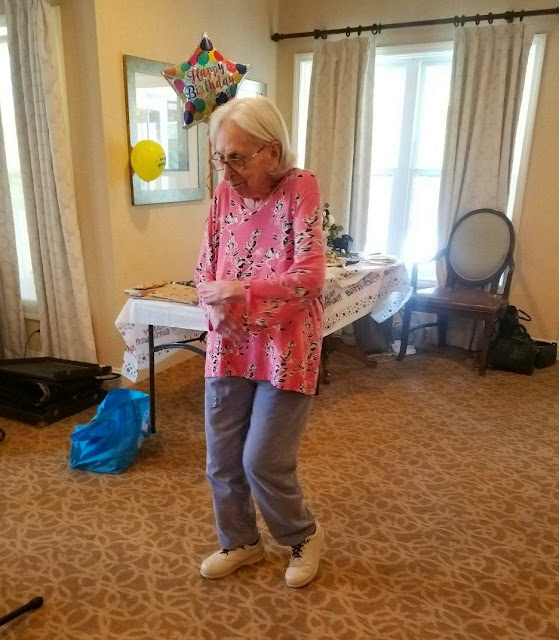 Born October 7, 1921, in St. Paul, Minnesota, to Art and Helen Singer, she is listed on her birth certificate as Joan Marguerite, but this is crossed out and replaced with Beth Rita (in Hebrew this would be Bathsheba Rachel). She had been preceded by her brother Arthur Jr. (aka Mort, or Moredecai) in 1919, and would be followed by a brother Paul in 1924.

Below, Mort and Beth experience her first Minnesota snow. She looks a bit startled. 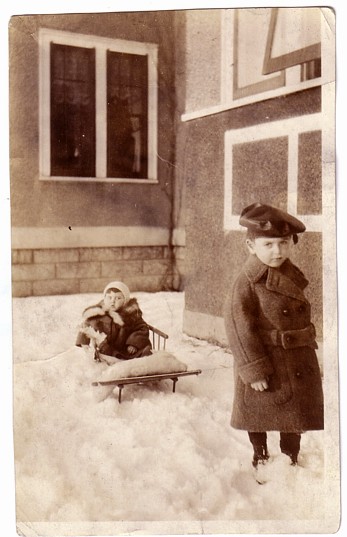 The family lived briefly in Dallas around 1930, where her father had been assigned in his ladieswear salesman position. Below, she is in Indian costume, with Mort front right. 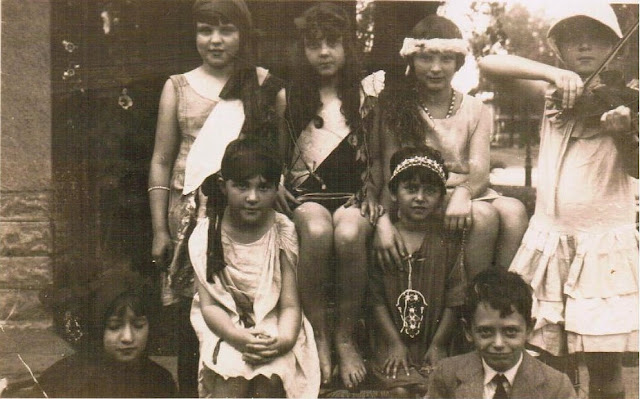 After a couple of years they returned to Minneapolis, where she lived all through high school. She attended Washburn High with Mort, who, because he had been a slow learner, was in the same grade although being two years older. Amazingly I discovered on Ancestry.com a copy of a Washburn annual from her graduating year (1934) that had once been owned by someone who’d known her brother — and included his autograph!

Here is what I believe is her senior-year portrait. 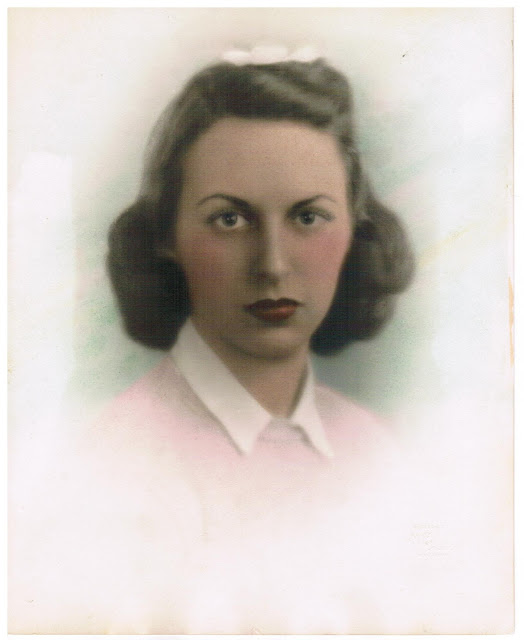 Beth earned a BA at the University of Minnesota, writing fiction and studying literature, where she grew to love writers such as Henry James, W. H. Auden, the Brontës, and so on — developing a fixation on all things English, including composers such as Benjamin Britten, and artists such as Joseph Turner, all of which was to influence her eventual adoption of Episcopalianism — the U.S. version of the highly ritualistic Anglican Church of England.

After college she went to New York to join a friend who got her a secretarial job with a publisher. She met a lot of literary luminaries, including Sinclair Lewis, one of whom read her work and insisted that she return to school and get a Master’s Degree in Creative Writing. She was accepted at the University of Michigan, in Ann Arbor.

Here between classes she was wooed by a number of young men, some Jewish, all of whom she found boring, weird, and “only interested in one thing.” She hung out with her boarding house roommates and girl friends until one day meeting my father, Nelson, checking out a book in the university library. She accidentally stamped his hand instead of the library card, with the immortal first words "Haste makes waste." Or maybe he was wielding the stamp, I'm not sure. At any rate, in him she found a kindred spirit in things literary, and he was a gentle soul with a good sense of humor. 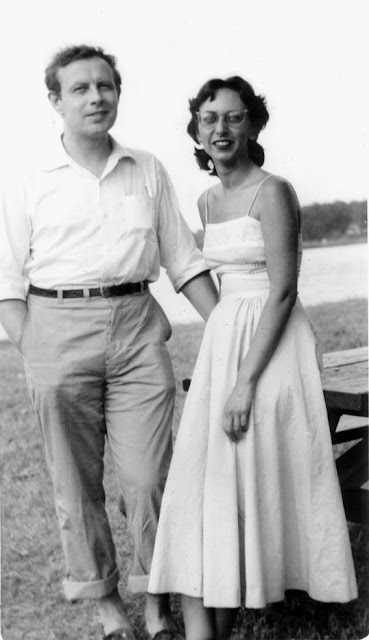 Both of them went on to win Hopwood Awards for writing — a whopping (for those days) $1000 — he for poetry (although he also wrote fiction) and she for fiction (although she also wrote poetry). She used her money to purchase a used Dodge, which they named Ramsbottom in honor of the view, from the driver’s seat, of the chrome beast on the hood. 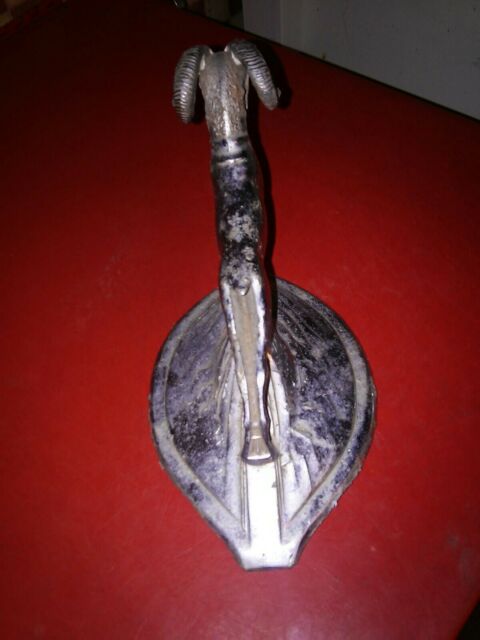 Beth and Nelson went on to “date” for five or six years, working at the coat-check desk of the UM’s Rackham Building, TA’ing for various English professors, going to classical music concerts, and continuing to write and take classes. Finally in 1951 or so she demanded that my father get a real job, so he began applying for teaching positions around the country. He was accepted at the University of Washington, and began teaching there in 1952. Beth followed him out on the train and they were married by a justice of the peace in Seattle.

Beth forsook fiction for poetry once I was born in 1954, as it was easier to find time to write short pieces when taking care of a baby. She began attending the poetry workshop that Nelson taught at the UW, and soon had published her poetry in The New Yorker, no mean feat for a beginner. 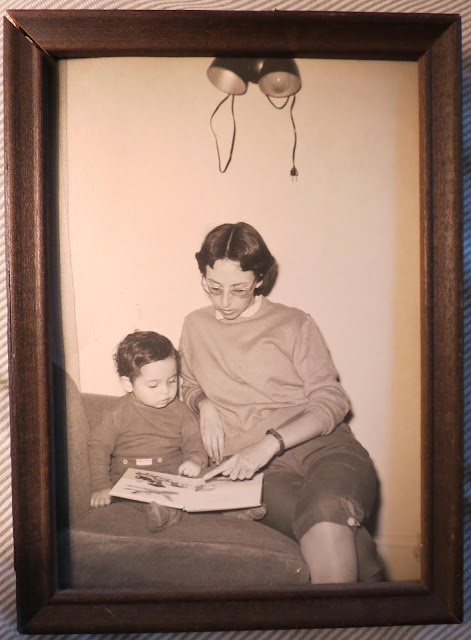 Beth went on to publish several books of her work, taught occasional poetry classes at various venues, including Bellevue Community College, as well as workshops in our home. 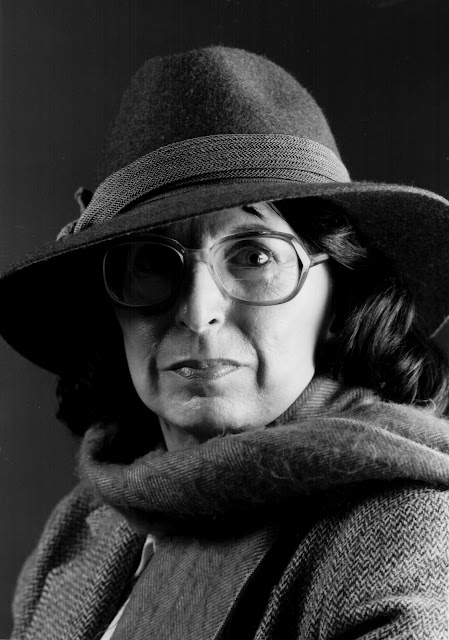