Continuing with excerpts from my great-grandfather David Blumenfeld's diary, which I discovered two years ago.

We join his father Ben Zion, who has finally managed to emigrate from Latvia to Michigan and begin working as a peddler...

By the middle of July 1884 Ben-Zion had saved enough money to send home, to pay for steamship tickets as far as New York. [His wife] Leah...showed great diplomacy in getting out of Russia, for she had two sons, especially David, now past twenty years old, who had to report to the military authorities for service, and Herman was reaching his eighteenth year. She packed her few heirlooms, the feather beds, the large pillows, the samovar, some copper kettles, which the old women told her were unobtainable in America, and the most precious of all, the brass Sabbath chandeliers, among the other household articles. 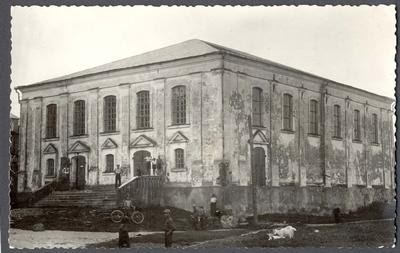 They then journeyed to Plunge [Plungyans], Lithuania, thence to Gorzd, also in Lithuania, where she left the boys in care of trusted smugglers who were to get them across the Russian frontier, an operation run hand in hand with great risk and difficulty. 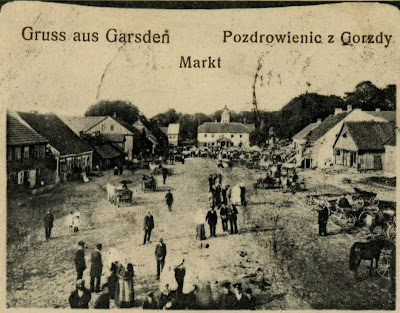 Running the gauntlet of the Russian frontier was an adventure for the Jews of that period. The Jewish community on the German side of the border operated the underground railroad system so silently that its romantic story is still to be written. 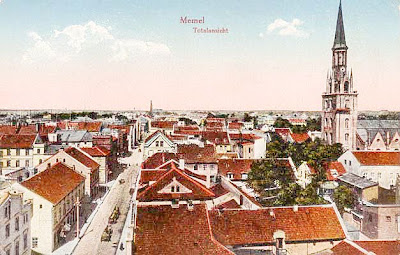 Leah, with just the girls and baggage, went straight to Memel, Germany (now Klaipeda, Lithuania), where they waited two days before the boys arrived. From there they all went on a tramp schooner to Stettin (Szczecin), Poland, then to Hamburg. Leah bought tickets to New York via Glasgow. 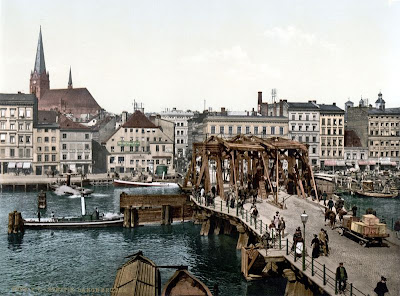 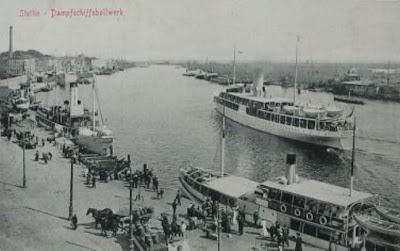 Their first lodging place before they were taken aboard was poor, unsanitary and unsafe. The sleeping quarters were unclean, what with twenty being housed in one room. 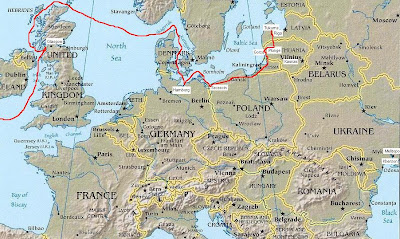 The Blumenfeld Trail from Europe to the US

Inhumane and uncivilized guards directed the bewildered immigrants to their quarters in the steerage where there was hardly any breathing space. The stench was unbearable. The food was dished out in dinner pails provided by the steamship company. Even drinking water was grudgingly given to the steerage passengers. No precaution was taken against inclement weather. One hundred to two hundred slept in one compartment, in bunks one above the other. There was no light, no privacy or comfort.

On the fourth day after they were on the high seas the steamer felt the surging might of the implacable ocean. A great wave rose suddenly out of the ocean and swept over the ship’s foredeck with a force such as only a wall of water possesses. In a flash it accomplished its destruction, twisting and breaking deck plates, stanchions and lifeboats. ...[The sailors] clamped down all hatches and covered them with oilskins to prevent drenching below the deck, thus shutting off the fresh air for those below, chiefly in the steerage. As the waves tossed the steamer, dishes rattled from the bunks to the floor, children cried in fear, men and women became seasick, and with trembling lips and failing hearts prayed to God, each in his mother tongue for the abatement of the storm. ...The trip took twenty-one days owing to the high seas they encountered.

At last they arrive in New York. 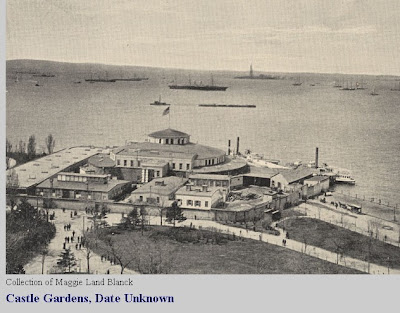 Poor Leah and her children were detained [at Castle Garden, precursor to Ellis Island], for there was no one to meet them. ...She and her children were held as captives of the law until they could hear from Ben-Zion. ...She laid before the commissioner the letters she had from her husband and pleaded for permission to send her eldest son to find him, as the steamer was to remain a week before its return to Europe. ...The immigration officer wired for information to Ludington, Michigan, and reply came that he was not there at that time but was away peddling and they could not reach him. Therefore, they permitted David to go to find his father. 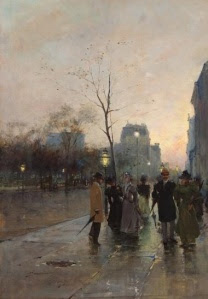 Fifth Avenue and 24th Street circa 1894, by Alessandro Guaccimanni

Leah had the address of a man named Zigler who once worked for her father and was supposed to be living in Madison Square. She told David to find Mr. Zigler first and tell him of their plight and to ask for help. David left after breakfast to look for Madison Square. He had with him $15 in American currency in an inside pocket.

To be continued...
And find more fascinating posts at Sepia Saturday blog

Some of these photos were borrowed from the following sites: